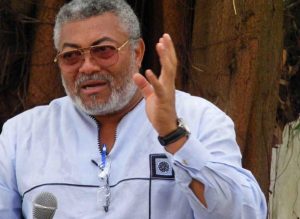 Former President JJ Rawlings has stated that the NDC’s defeat in the December 7, election was self-inflicted.

According to him,  the party, before the elections, had departed from the core principles that birthed it, hence defeat was unavoidable.

In a message during this year’s 31st December revolution commemoration, Mr. Rawlings said the party ignored several warnings and caution to get back on track and to its true character.

“Most people are yet to recover from the traumatic shock of the December 7th election results. But I will have to state that if we turn our backs to our history us a party, we cannot escape the responsibility for the result. Those who cannot remember the past are condemned to repeat their mistakes over and over again,” he said.

He continued : “Need I remind you that the NDC was built on principles and values that emerged as a result of circumstances that led to our birth?

“The NDC’s painful and massive rejection at the polls is indicative that we have lost the moral high ground that sets us apart from others. Great lengths were taken to draw the attention of the party as a collective but none of it will be tolerated or accommodated.

“We lost the elections way before the 7th of December. We persistently and unrepentantly stayed on the slippery slope to the humiliating defeat despite the several warning lights right in our faces. My honest wish was for corrective measures to be taken to avert this electoral disaster”.

The NDC lost the December 7, elections to the main opposition New Patriotic Party by some 1.5 million votes.

Mr. Rawlings who founded the NDC did not take part in their campaign ahead of the polls