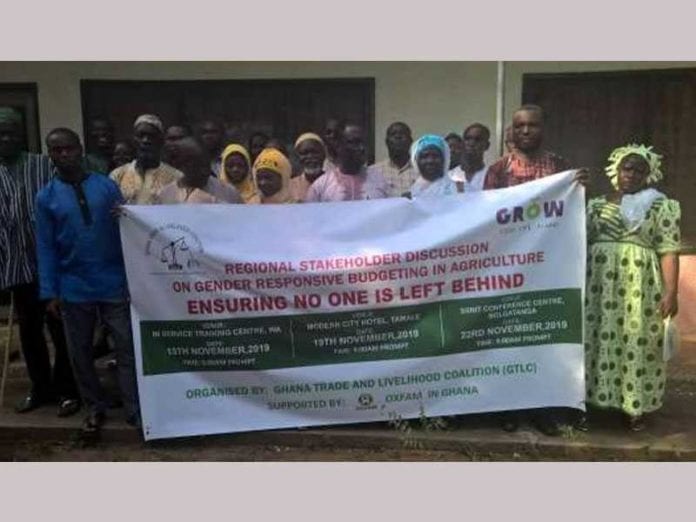 The Ghana Trade and Livelihood Coalition (GTLC), an agriculture, trade and nutrition policy advocacy organisation, has recommended to government to adopt gender responsive budgeting in implementing its flagship Programme, Planting for Food and Jobs (PFJ) to ensure equity among farmers.

It said gender responsive budget would ensure gender-equitable distribution of resources and enhance access to other services under the programme, which it added, would encourage the youth, women and Persons With Disabilities (PWDs) to venture into the agriculture sector.

Mr Ibrahim Akalbila, Coordinator of the Coalition, made the recommendation during a regional policy dialogue on gender responsive budgeting in the agriculture and related sectors, organised by the GTLC, in Tamale.

The event, with focus on the PFJ programme, created a platform for farmers to interact with duty bearers and other stakeholders in the agriculture sector to discuss the needs and challenges of farmers, with the aim of promoting gender equality in the policy.

Mr Akalbila said a study conducted by his outfit in some districts in the Northern region in 2018, revealed that 70 per cent of women and 76 per cent of PWDs, as against 89 per cent of men had access to services under the PFJ programme.

He expressed worry about how men were predominantly benefiting from the programme, saying; “our statistics clearly shows that men are considered more than women and PWDs, which is a challenge”.

The Coordinator said “it is for this reason we think it is appropriate that the government should adopt the gender responsive budgeting approach in the implementation of the PFJ policy to bridge the inequality gap to enhance the participation of everyone”.

Mr Alhassan Abdul-Fatawu, Assistant Monitoring and Evaluation Officer at the Northern Regional Office of the Ministry of Food and Agriculture (MoFA), gave the assurance that his outfit was ready to offer technical support to farmers and increase their access to subsidised seeds and fertilizers, to boost crop yield and enhance food security in the country.

Mr Yakubu Saaka Daniel, a farmer, claimed that some seeds being provided by the government as part of the programme were of low quality, and were rejected by farmers.

He therefore, appealed to the government to develop strategies to address the problem to sustain farmers’ interest in agribusiness, to enhance their economic wellbeing.