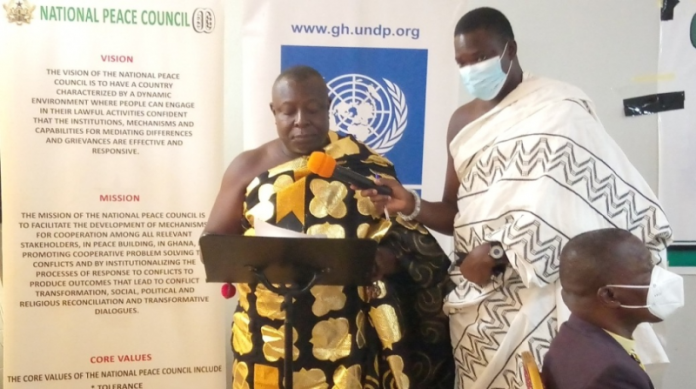 He said the situation in Chad, Niger, Nigeria, Burkina Faso and Mali should alert the country to address root causes and drivers of violent extremism which often include socio-economic issues, discrimination, marginalisation, poor governance and human rights violations.

Torgbui Fiti, who spoke at the opening ceremony of a capacity building workshop on peacebuilding, early warning and preventing violent extremism, underscored the need for all,especially the state to get involved, noting, “no one is born a violent extremist-they are made and fueled.”

“To prevent violent extremism means addressing root causes to find peaceful, inclusive and sustainable solutions. It also requires strengthening the state authority and good governance at local levels because, in the absence of a state presence, violence, insecurity and organised crimes flourish.”

“Those without income or education join extremist groups at a much higher rate than others and recruitment happen swiftly. UNDP’s research found that 80 per cent of young people from poor communities who joined extremist groups did so within a few months of the first contact with a recruiter,” Torgbui asserted.

Mr Kojo Impraim, Deputy Director, Research, Monitoring and Evaluation at the National Peace Council (NPC), who represented the Governing Board and the Chairman, said, “Ghana is at the preventive stage and we have to do everything as stakeholders within our responsibilities to prevent this threat to peace and security in Ghana.”

He said the spill-over of terrorism from the Sahel region and organised crime in border areas to West Africa required counter-narrative about radicalisation and violent extremism because its absence “further perpetuates an environment already conducive to the recruitment of young people by violent extremist groups.”

Mr Elliot Edem Agbenorwu, Municipal Chief Executive for Ketu South, was grateful the Municipality was chosen in Volta Region for the training.

He said the uniqueness of Ketu South as home to Ghana’s busiest border, which opens directly into the capital city of another country, made it prone to cross-border crimes.

He mentioned chieftaincy-related issues, international boundary (both land and sea) concerns between Ghana and Togo, infrastructure challenges, leading to protests, vibrant political activities and emerging piracy issues as threats in the Municipality and assured that the Assembly was keeping a close watch on them to prevent any escalation.

The three-day workshop organised by NPC with funding from the UNDP took the carefully selected participants from the Municipality through presentations, including Understanding Conflict, Peacebuilding Approaches, Gender Dimensions in Conflict and Peacebuilding, Early Warning Response Actors, and Strategies to Prevent Violent Extremism with Dr Festus Aubynn, Ms Euphemia Dzathor and Bro Agboso Atta Peter as facilitators.