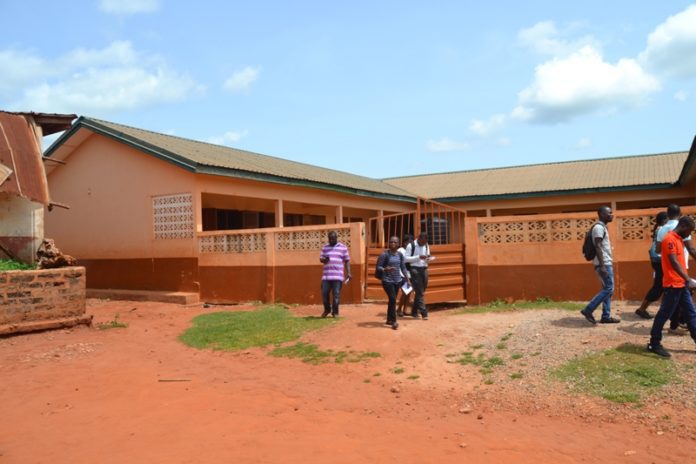 The Public Interest and Accountability Committee (PIAC) wants contractors who have delivered shoddy works for oil financed projects in the country to be punished.

The Committee, which has oversight responsibility over the prudent management of the country’s petroleum resources, has noted that it is unhappy with how some projects that are funded with oil and gas revenues are poorly executed and therefore believes it is high time contractors who did shoddy works were surcharged and made to pay for the cost of remedies carried out on their poorly executed projects.

Dr Steve Manteaw, Chairman of the PIAC, after leading a team of PIAC members and journalists from the Institute of Financial and Economic Journalists (IFEJ) to inspect a six-unit classroom block constructed for the Bronsankro Primary School at Bechem in the Tano South Municipality of the Brong Ahafo Region registered the Committee’s displeasure at the quality of work done.

“We find serious defects in the work that was done. Barely two years into completion, we see floors all worn out, doors and ceiling coming off. We are also told the unit was constructed without furniture and blackboards.”

“The school is now falling on the assembly to correct the defects and this we believe is not right and the contractor has to be surcharged for whatever it costs to rectify the defect,” he said.

Dr Manteaw blamed the shoddy works done by contractors on the low involvement of relevant stakeholders in the project selection, awarding and implementation processes.

Information made available by the PIAC to journalists on the project monitoring indicated that the project was to see to the construction of a six-unit classroom block at a sum of GH¢297,270. The amount paid till date stood at GH¢324,140.42 and the project was still not fully completed.

The contractor for the project was Messrs Rolat Enterprise Limited and the consultant was AESL. Construction and it lasted for eight months.

When the PIAC/IFEJ monitoring team visited the school on May 21, the building, which was said to have been handed over in 2016, was full of defects.

Aside from being handed over to the assembly empty without ancillary facilities, portions of the roofing of some of the classrooms were falling off and the floor of almost every classroom had potholes.

The door frames were poorly fitted without any burglar proof and no furniture or blackboard. The school, therefore, had to fit one itself.

The head, Building Section of the Tano South Municipal Assembly Works Department, Mr Bright Amankwah, indicated that the assembly was not aware of the project from its inception but only saw the award of the contract later.

That notwithstanding, the assembly, he said, conducted periodic monitoring on its own and realised there were some defects.

Not satisfied with the construction, Mr Amankwah said the assembly refused to accept the project after it was completed, and the contractor was tasked to correct the defects.

“When we came to the site in 2016, we met some defects on the floor, we then told the contractor to correct the defect in the presence of the consultant. After we just realised the contractor had been paid his retention and the documents sent to us to file in the office and that ended it,” he explained.

The Head teacher of the Bronsankro Primary School, Mr Ali John, also did not hide his disappointment over the project explaining that the contractor failed to come back to correct the defects after his attention was drawn to them.

“We are not satisfied at all, the floor wasn’t properly done so we told the contractor to do it well but since then he has not come back to complete it. There were no desks for the pupils and the drains weren’t done,” he said.

When asked whether he knew of the funding source for the project, he responded in the negative.