Accra Great Olympics, will travel to Obuasi to take on Ashanti Gold at the Len Clay Sports Stadium on Sunday afternoon, in a battle that has so much at stake for both sides. 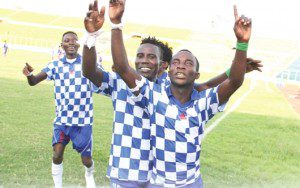 For Ashgold, they will need a win to appease their fans, after losing the first game, whilst Great Olympics will need victory to confirm their great performance in the Division One League that saw their promotion into the premiership.

The home side suffered a narrow defeat to Dormaa based Aduana Stars, in the opening round of matches and have been heavily criticized in the last couple of months, following an abysmal title defence in the last premier league season.

Having started the season with defeat, the four times champions will seek to get back to form, with an emphatic victory over the Ghana Premier League returnees.

Whilst the wonder club of Ghana football, Accra Great Olympics will play their first game of the season, after their fixture against Bechem United was postponed, because of the CAF Confederation Cup, which was scheduled for the last weekend.

Coach Godwin Attram’s tactical expertise will come to bare, as he goes into his first season as a head coach in Ghana’s top division.

After an incredible return to the premier league, Olympics will hope to make a good statement for themselves, this time around with the blend of both young and experienced lads.

Ashantigold will need the best of their magician Emmanuel Osei Baffour ‘Manomaa’ and new boys Kofi owusu, Commey Idan and Roland Amozou to overcome the threats of the new comers, who are determined to ensure their survival in the league.