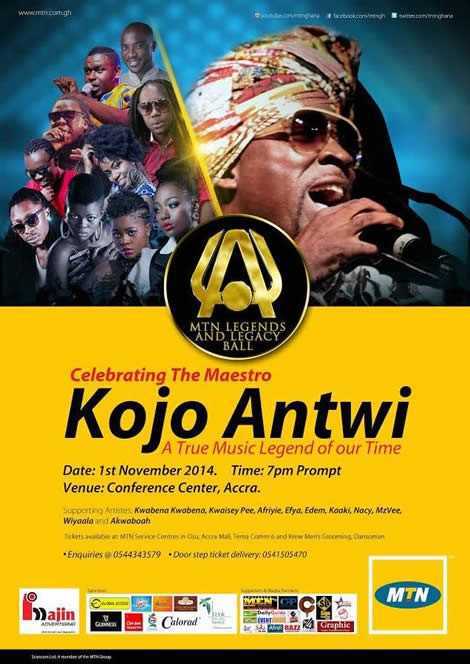 It is early December but Imajin Advertising, organisers of the annual Legends and Legacy (LAL) Ball which honours outstanding Ghanaian musicians, is yet to say anything about whether the event would happen again this year or not.

The LAL Ball series was started in 2011 and all the previous editions were held in November. Speculation is therefore rife, especially in music business circles, about whether another of our deserving musicians would be honoured by Imajin Advertising before the year runs out.

In an interview with Showbiz last Tuesday, Kojo Soboh, the Events and Promotions Manager at Imajin Advertising said LAL Ball 2015 will definitely be held before the end of this month.

“I know we have entered December and usually by this time, a legend should have been already honoured but I want to assure everyone that it would be done this month,” he stated.

Daddy Lumba was the first musician honoured at the LAL Ball in 2011. The mantle fell on Amakye Dede in 2012 followed by AB Crentsil in 2013. Kojo Antwi took the spotlight last year.

According to Kojo Soboh, since this year marks the fifth anniversary of the event, the organisers intend to package it as a special ‘thank you’ treat for the patrons who have helped to make it a formidable brand over the years.

“The organising team would hold its last stakeholders meeting today, Thursday to take a final decision and we would make the public aware of the show details right after the meeting.

‘We have introduced a product well-liked by the public. We are aware of the reputation we have earned through organising the LAL Ball and we intend to go up by several more notches this year,” Kojo Soboh pointed out.

What music fans are also keen to know is the personality to be honoured this year. Names that have popped up in the course of the year include Regggie Rockstone, Paapa Yankson and Daughters of Glorious Jesus.

Kojo Soboh was, however hesitant to comment on which music legend would be honoured for 2015.

“As I said earlier, we are yet to hold a meeting that will finalise all our preparations for the year. Everything will be out by the close of the week,” he confidently said.

Whoever takes the spotlight to be celebrated at the next LAL Ball, there will definitely be a tall list of supporting artistes to do their interpretations of that personality’s songs.

“Sekondi-Takoradi Marathon will be better this year” – Organisers

Treason: We don’t want to fail, it must happen – Mac Palm

Is Gayism bound to happen in Ghana?

Black August and the Legacy of Liberation Struggles

What could happen to Donald Trump’s company if it’s indicted?