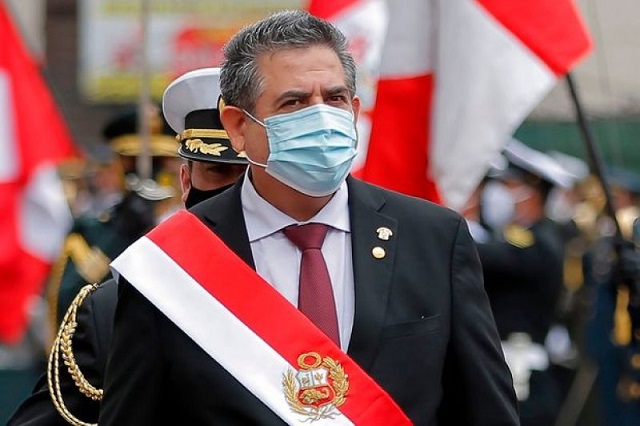 Peru’s interim President Manuel Merino has resigned after just five days in office, in the wake of violent protests over the ousting of his predecessor.

Clashes between police and protesters in Peru’s capital Lima left two people dead on Saturday after thousands hit the streets in several cities for the fifth day in a row, protesting what they saw as the undemocratic deposition of president Martin Vizcarra.

Merino announced he was resigning in a public address on Sunday, calling for peace and unity and saying nothing justified the death of Peruvians in legitimate protests.

However, he also said that some groups of individuals who wanted to sow chaos were involved in the protests, which must be investigated.

All cabinet ministers have officially vacated their posts, Merino said. However, they were set to remain in office until the current uncertainty was overcome.

It was initially unclear who would succeed Merino as president, though the outgoing leader said he would not leave a power vacuum behind.

Vizcarra was removed from office last Monday in a vote of no-confidence by a firm majority of lawmakers, after he was accused of taking 2.3 million soles (636,000 dollars) in bribes from a construction company during his time as governor of the Moquegua region from 2011 to 2014.

He denies the allegations and did so again before the impeachment vote, while accusing the opposition of trying to destabilize Peru. He said he would leave parliament “with his head held high.”

After Vizcarra was forced out, conservative parliament speaker Manuel Merino took office as head of state on Tuesday.