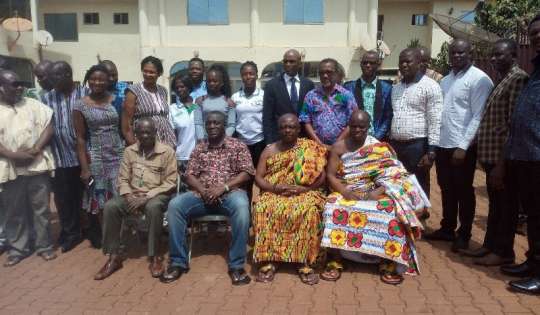 African leaders have been urged to appreciate, revisit and build on their indigenous knowledge to push forward the socio-economic development of the continent.

This is the surest way to liberate the continent from economic and mental slavery, says Professor David Millar, the President of the Millar Institute for Transdisciplinary and Development Studies located at Bolgatanga in the Upper East Region

He was speaking at the opening session of the fourth African Learning Training (ALI) on ‘revitalizing African cultural heritage and bio-cultural resources for food sovereignty’ underway in Techiman Municipality of the Bono East Region.

Prof Millar, a development philosopher indicated countries such as Bolivia, China and the Arab world were making huge development impact on the globe because they had built on their indigenous knowledge.

He observed Africa could do much better than those countries because the continent was blessed with diversities in unique and rich cultural values and heritages that portrayed and made people on the continent special from others.

Prof. Millar said though the International Monetary Fund (IMF) and the World Bank (WB) had strong economic support form, governments on the continent must not over-relied on WB and the IMF.

Instead, he said African leaders should invest hugely in the development of their indigenous knowledge to empower them to tap into and harness their numerous natural resources to push the socio-economic development of the continent.

Dr. Gabriel Gbiel Benarkuu, the President of CCOD, which is a franchise holder of the Institute of Organisation Development in the United States, said despite various cultural diversities, African governments must come together, identify, tackle and find lasting solutions to challenges confronting the development of the continent.

He commended the ALI, saying, it remained a key platform to bring Africa together, and hoped the Institute would be strengthened for more African countries to be brought on board to help liberate the continent from poverty and ignorance.

Mr. Benard Guri, the Executive Director of CIKOD, explained the concept of the training was to build the skills and competencies of the participants to be able to apply endogenous development and organisational development tools.

“We hope to achieve this by creating awareness on the root causes of the development crisis in Africa in general and food crisis in particular”, he said.

Mr. Guri added “the ultimate goal is to build strong linkages and networking among CSOs in Ghana and Africa in efforts to mobilize traditional ecological knowledge and resources to upscale agro-ecology and strengthen bio-cultural resource conservation in the communities as contribution to the visible effects of climate on the continent”.

Other speakers and facilitators for the training workshop include Nana Kobina Nketsia, the Paramount Chief of Essikado and Dr. Benjamin Kunbour, a former Minister of State.