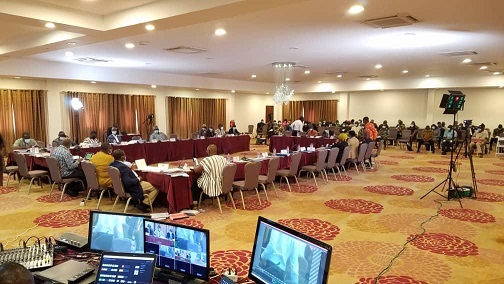 The Public Accounts Committee of Parliament has begun a weeklong session with public institutions in the Greater Accra, Volta, Eastern, and Oti Regions.

The five-day sitting at the Volta Serene Hotel, travels through the holiday of September 21, and would consider audit reports on senior high and pre-tertiary institutions in the four Regions for the period ending December 31, 2017.

The Committee, chaired by Mr. James Klutse Avedzi, Member of Parliament for Ketu North Constituency, would also dissect reports on teacher training colleges in the regions for the same period.

Mr. Avedzi observed on the prevalence of abandoned projects the educational sector, and asked internal auditors to take note and help ensure they were competed.

Senior high schools opened the session, and heads of management responded to enquiries on financial activities as captured in the Auditor General’s report.

Schools including the Anlo Senior High, Nkonya Senior High, Keta Business College, Anfoega Senior High, Ola Girls, and the Keta Senior High were summoned to the sitting, which was being broadcasted live across the nation.

The Accra, Ho, and Koforidua Technical Universities also appeared before the Committee for compliance evaluation on financial and accreditation related recommendations.

He called to consider the introduction of “audit clearances” in institution management to help ensure that individuals or entities did not flee their deeds and responsibilities, adding that a recommendation would be made at the legislative level.

“The Ministry of Education has the largest chunk when it comes to Government’s budget and we need to expect them to account for every penny that we give them,” he said.

Mr. Rockson Dafeamekpor, MP of South Day, also a member of the Committee, said financial leakages in public institutions remained “so high”, the least effort to seal them would save the nation significant number of resources.

He also called for the Committee to be “reformed and empowered” to support efforts at ensuring sound financial practices for national development.

The committee ends its work on Saturday, September 25.