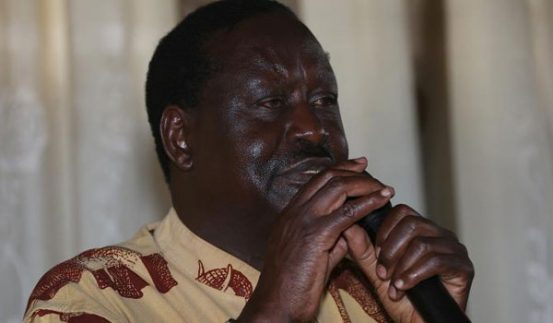 Former Prime Minister Raila Odinga addresses the Luo Council of Elders in Kisumu where he declared his willingness to testify in favour of DP William Ruto if requested. (Photo:Titus Munala/Standard)

Raila said Sunday if called upon he would testify at the The Hague-based court where his former political ally is on trial alongside journalist Joshua Sang for their alleged role in the 2007-2008 post-election violence.

Raila however indicated that Ruto was yet to approach him to do so. Ruto?s charges are anchored on claims that as a member then of Raila?s Orange Democratic Movement, he was determined to end former President Mwai Kibaki?s presidency and voted on Odinga?s side.

When the power-sharing deal mediated by the African Union and international community was signed, Raila became a Prime Minister while Ruto joined Cabinet as Minister for Agriculture.

Sunday afternoon, Ruto welcomed Raila?s offer but once again insisted he was innocent and would soon be vindicated.

?The Deputy President welcomes Hon Raila Odinga?s offer to testify, however, his conscience remains clear. He?s innocent and in a short while he will be vindicated,?? ran a statement released by his office Sunday.

It added: ?He has a competent legal team handling his case, which determines issues of evidence. He thanks all well wishers for prayers.?

However, it was not clear if at this stage on trial, Ruto can still introduce new witnesses and the process of doing so.

?When asked to testify, I am ready and willing to do so on behalf of my party, ODM,? said the ex-PM on recent overtures by Ruto allies that he should consider testifying in Ruto?s defence because he was the party leader and Presidential candidate.

Raila explained he was ready to tell ICC judges that his ODM party never at any time planned violence to harm any sections of the Kenyan community. Prosecutors allege Ruto and the ODM orchestrated violence against Kibaki?s Party of National Unity supporters.

The ICC cases arose from the violence following the disputed 2007 presidential election in which the electoral commission announced incumbent Kibaki as the winner but Raila, who was ODM?s candidate, too, claimed victory.

Ruto was then a member of Raila?s ODM?s Pentagon, a team of regional political kingpins that led Raila presidential campaigns. ICC named six Kenyans from both political divides that prosecutors claimed bore the greatest responsibility for the violence in which over 1,200 were killed but cases against four of them were terminated, leaving Ruto and Sang in the dock.

Then Kanu chairman and Opposition leader Uhuru Kenyatta, who backed Kibaki?s re-election, was also among those facing trial at The Hague but the prosecutor withdrew charges against him over lack of evidence and alleged witness interference.

Uhuru and Ruto would campaign jointly on an anti- ICC platform in the March 2013 election in which they swept to power under Jubilee coalition, defeating Raila, who they blamed for their ICC woes.

Sunday, Raila who now heads the Coalition for Reforms and Democracy spoke to journalists at Hillside Hotel in Kisumu where he was reconciling two warring factions of the Luo Council of Elders.

It was the first time Raila was commenting on the matter after a section of Rift Valley leaders allied to Ruto called on him to testify at ICC.

A week ago, United Republican Party (URP) lawmakers, mainly Ruto?s allies, reached out to the CORD leader to testify for Ruto in his case.

In a surprise about-turn, the leaders, including Elgeyo/Marakwet Senator Kipchumba Murkomen, who is a lawyer by profession, maintained that Raila should demonstrate his statesmanship by standing with Ruto who was a key member of ODM.

The leaders were of the opinion that Ruto was one of Raila?s political lieutenants during the post-election violence crisis of 2007-2008.

Murkomen had indicated that Raila would indeed be key in fighting off the prosecution in The Hague since he is in a better position to convince the judges and the entire world that the party had no ideology or scheme to trigger violence and to evict other ethnic communities from parts of Kenya.

Raila said the government should involve citizens of Kenya in such sensitive decisions such as pulling out of the Rome Statute, a move that Uhuru is, among the prominent African leaders, pushing.

He mentioned that the cases some Kenyans are facing at the ICC are international problems not unique to Africans alone but also in Europe and other Western nations.

He termed the narrative being peddled that ICC is targeting African leaders as inaccurate.

?You can remember the issue of Yugoslavia where their former president Slobodan Milosevic was being tried and ended up dying at The Hague,? said Raila adding that the incident should be a confirmation that ICC does not target Africans alone.

He said that ICC had handled more African cases because there are more violations of human rights in Africa than other parts of the world.

Raila accused Uganda President Yoweri Museveni of being vocal against ICC yet on the other side no African leader, including the Ugandan leader, was talking about Ugandan rebel Dominic Ong?wen whose case is ongoing at the ICC.

?This kind of selective justice will not help this continent,? said Raila adding that Museveni had not tried to bring back Ong?wen to face Ugandan courts instead of ICC.

He reminded Kenyans that together with Kibaki, they tried to push for a local mechanism to try those who were involved in crime against humanity but they faced rebellion.

But even as the ODM party leader offered to testify, a section of CORD MPs from Kwale County declared Ruto should carry his own cross, arguing his allies had ?demonised? the former premier over the ICC cases.

They claimed URP members should not drag Raila into the Deputy President?s legal problems or try to entice him to testify for him.

?It is now that they have realised that our party leader can stand with them. After soiling his name we are telling them to leave us in peace,? said Boy Juma Boy in Diani.

Boy noted that it beats logic to imagine that Ruto?s allies can now consider Raila to be his saviour in ICC.