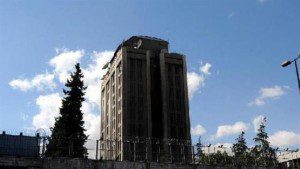 Two rockets have reportedly hit the Russian embassy in the Syrian capital, Damascus, with no further details available at this point.

Early reports on Tuesday morning indicate that Takfiri terrorists fired two shells at the embassy as scores of people had gathered around the compound to express appreciation for Moscow for its air support in Syria?s battle against militants in the country.

An AP report said that the fist shell struck an area inside the Russian embassy in central Damascus and ?smoke billowed from inside.? It added that the next shell landed in the area as people were fleeing the site.

This is while Russian press reports cite eyewitnesses as saying that ?several shells? exploded ?outside? the Russian embassy.

There has yet been no report of casualties following the attack.

Meanwhile, Russian Foreign Minister Sergei Lavrov is cited by the local RIA Novosti news agency as saying that Russia considers the shelling of its embassy compound in Damascus as an act of terrorism. Syrians rally near the Russian embassy in support of the Russian bombing campaign against militants in Syria, in Damascus, October 13, 2015. Rockets reportedly hit the site during the demonstration. (Photo by AFP)

The foreign-backed terrorists on the outskirts of the Syrian capital have targeted the Russian embassy in the past but it was not immediately clear whether the Tuesday morning attack was intended at the pro-Russia demonstration or the embassy itself. People carry Syrian and Russian flags as well as the portraits of Syrian President Bashar al-Assad and Russian President Vladimir Putin during a rally in support of the Russian bombing campaign against militants in Syria, in Damascus, October 13, 2015. (Photo by AFP)

Russia launched an aerial campaign against terrorists in Syria on September 30 at the request of the Damascus government.

More than 250,000 people have lost their lives in the violence fueled by foreign-backed Takfiri groups in Syria since March 2011. The Syrian army has been engaged in heavy battles against the extremist militants on many fronts across the country over the past four years.