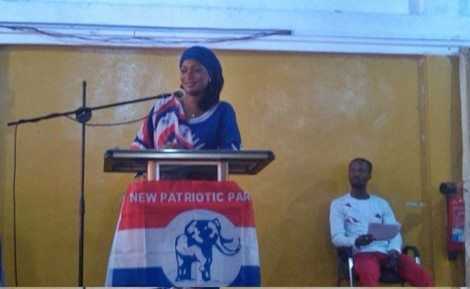 She said the NPP has a good vision to rejuvenate the economy through job creation that would improve the living standards of the people saying that the National Democratic Congress (NDC) has failed the people of Ghana hence the need to show them the exit.

Hajia Samira said this during a rally with some tailors and dressmakers in Tamale where she presented assorted items including measuring tapes, pairs of scissors and an undisclosed amount of money to aid them in their businesses.

The rally attracted women dressmakers and traders many of whom promised to vote massively for the NPP.

Hajia Samira said the National Health Insurance Scheme (NHIS) was eroding its significance in the regime of the NDC as clients could no longer be provided with needed medication because of poor management.

She said the NPP would revive the NHIS and revamp the ailing economy saying, “NPP under Nana Addo will provide good governance and create jobs for the youths”.

Mr Daniel Bugre Naabu, Northern Regional Chairman of the NPP, said unemployment among the youth has become the norm as many people could not find jobs even after graduating from school.
“We of the NPP place premium on the tailoring and dressmaking industry and will go at any length to support and make it viable and attractive”, he said.

Mr Naabu said the party had been in opposition since 2009 yet it still has the desire to support businesses to thrive in this country and urged the business community to give the NPP victory in the coming polls.