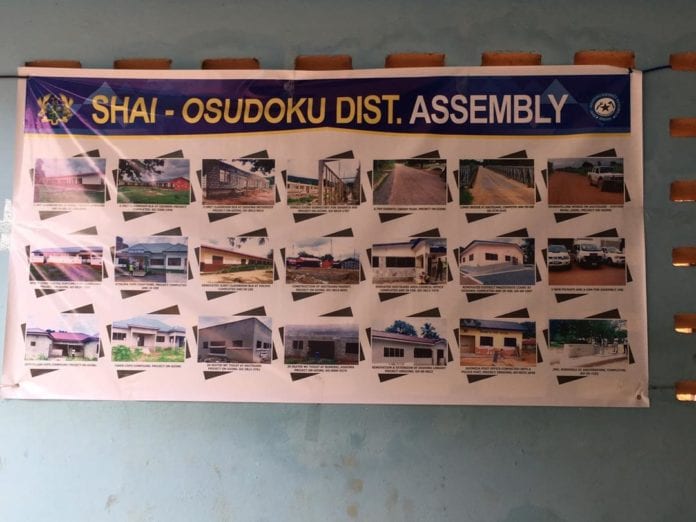 Mr Daniel Akuffo, District Chief Executive of Shai Sudoku District Assembly, has said that efforts are being made to implement all government policy interventions in the district.

He said this at the meet-the-press series organized by the Assembly to deliberate on government policies and projects being undertaken in the district.

On education, Mr Akuffo said, the Assembly has been able to implement a total of nine classroom block projects in Osuwem, Asutsuare, Kongo and Volivo- with four completed projects and five on going ones.

The Assembly also provided scholarships to some needy but brilliant students and distributed 1,750 pieces of furniture to kindergarten pupils in the district, he said.

In the health sector, Mr Akuffo said, a total of seven projects have been initiated, three of which are completed (at Ayikuma, Doryumu and Asutuare Junction) and four are on-going at Dormeliam, Sota, Tokpo and Agomeda.

He said various projects have been undertaken in relation to roads and these include reshaping the Osuwem to Osuyom road, rehabilitation of Lomeh Bridge at Asutsuare and the reshaping of Dodowa-Afienya road amongst others.

Mr Akuffo said 2,035 were employed under the ‘Planting for Food and Jobs’ programme and 12 agro shops are currently stocked with subsidized seeds and fertilisers to enable farmers increase their yields.

He said under the Nation Builders Corps (NaBCo), 185 trainees were posted to the district under the various modules and 35 out of the total number have been absorbed into the public and civil services.

Mr Akuffo commended his management team and heads of department of the Shai Osudoku District Assembly for their various efforts in the period under review.