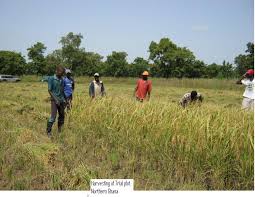 The Small Scale Rice Dealers Association of Ghana (SSRIDA) has hailed the decision of Dr Ekwow Spio- Garbrah, Minister of Trade and Industry to facilitate the implementation of the law banning foreigners from the retail business. A statement issued by Mr Yaw Korang, Coordinator of SSRIDA in Accra and copied to Ghana News Agency in Accra, described the meeting between the Minister and Mrs Georgina Theodora Wood, Chief Justice that defined the framework for implementing the law as ? very refreshing?.

During the meeting the Chief Justice said the Judicial Service would support government?s initiative to enforce provisions of the law that makes retail business, a preserve of Ghanaians.

This, the statement said is in line with Ghana Investment Promotion Centre (Act 865).

Mr Korang also lauded Dr Spio-Grabrah?s call on the Judiciary to back the exercise to make it succeed as well as his decision to throw his weight behind the capacity training of the prosecutors for the proposed specially designated courts to prosecute offenders.

He said the proactive measures taken by Dr Spio-Garbrah gives SSRIDA the hope that he could work with members to find an amicable solution to the ban on inland importation of rice, which had crippled their businesses and rendered them bankrupt.

Mr Korang said while the ban is in place foreign importers of rice are being allowed unbridled access to the market and flooding the country with the goods leading to price hikes at the disadvantage of the Ghanaian small scale importer.

It would be recalled that members of SSRIDA put on hold their intended demonstration against some policies of the Ministry, which members deemed to be inimical to their businesses following further consultations with the Ministry officials.

In June this year Ghana Union of Traders Association also resolved to close their shops in Kumasi and Accra for four days to protest against unfavourable trade policies directed at their businesses.