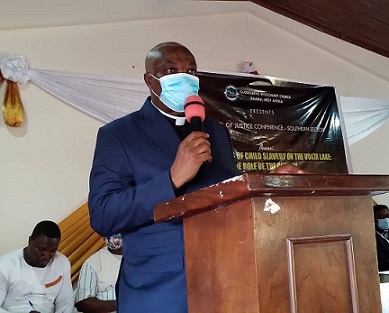 He urged Church leaders to encourage their members who were professionals such as psychologists, counsellors, social workers, entrepreneurs to help rescued children build new lives.

Rev. Barrigah who was speaking at ‘The Gospel of Justice Conference’ at Sokode-Lokoe in the Ho Municipality of the Volta region, underscored the need for Church members to adopt victims of child abuse and fend for them.

The Conference was organised by Globeserve Ministries International in partnership with Westwood community church, USA, Wooddale church, USA, and International Justice Mission (IJM) and was on the theme: “The challenges of child slavery on the Volta Lake: The role of the Church.”

The General Secretary said it was imperative for churches to engage in advocacy, championing the safety and welfare of children, saying Christian advocacy was a divine thing to do.

Speaking on the topic “God’s heart for justice: The role of the church,” Rev. Barrigah said God was justice and justice was central to God’s heart and character, and he was very passionate about justice, and his justice and righteousness were inextricable.

He said God’s concept of justice surpassed that of human beings and his throne was established on justice as stated in Psalm 89:14, “Righteousness and Justice are the foundation of your throne; love and faithfulness go before you.”

Mr Barrigah noted that church leaders could speak out with considerable authority about many situations and challenged unjust laws and promote and defend the rights of the poor and vulnerable, and this could be done through press releases, press conferences, communiqués among others.

The General Secretary charged all and sundry to be concerned about issues affecting children and speak out, quoting Proverbs 31:8-9 which says, “speak up for those who cannot speak for themselves, for the rights of all those who are destitute. Speak up and judge fairly; defend the rights of the poor and needy.”

Mr Barrigah said it was the desire of God for his people to have the right relationship with one another, live in peace with one another and treat each other with dignity and respect, and this should not depend upon a person’s race, ethnicity, social, economic or educational status or gender.

Mr Barrigah said God really cares about victims of injustice and was prepared to act and to go to every extent to deliver them albeit using human instruments as the Lord said “I have indeed seen the misery of my people in Egypt. I have heard them crying out because of their slave drivers, and I am concerned about their suffering.”

Reverend Samuel Kofi Anthony Dunya, Founder and General Overseer, Globeserve Ministries International, said the word of Justice resonated very well with anyone who had an encounter with the gospel of Jesus Christ the Lord.

He said in the absence of truth there can be no justice or knowledge of justice as truth was constant and absolute, adding,

“Without justice we have no gospel, and the life of God cannot be known and appreciated, and true transformation that comes from the gospel will elude us all.”

Rev. Dunya said justice was not meant to stand alone, but with the truth which is the gospel, because truth was liberating, comforting, progressive and transformative, adding that anyone who had experienced justice lived justly, and to live justly one had to have an encounter with the gospel.

He said restoring justice was God’s work and mission all through history and it was the heart of his loving calling and redeeming his people and was at the heart of salvation and cost God his Son in order to set thing right with sinful mankind.

For sake of justice, he exchanged his life with my death, his righteousness with my sin, and his New life with our old self. In this light the Gospel embodied love that expresses itself in truth and leads to justification that results in living justly and doing right, he stated.

Churches Advised To Pay Attention To The Psychosocial Needs Of Members