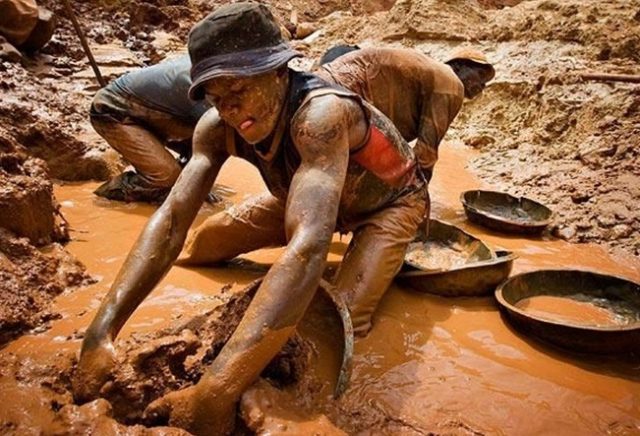 The Operation Vanguard, a joint Military-Police Taskforce set up by the government to enforce the ban on galamsey activities in the country has secured conviction against 39 ‘galamseyers’ (illegal miners) out of 515 arrested.

Police Chief Superintendent (P/C Supt.) Abraham Acquaye, National Deputy Commander of the Taskforce, disclosed when he addressed a Townhall Meeting organised jointly by the Media Coalition Against Galamsey (MCAG) and the National Commission for Civic Education (NCCE) on Thursday at Kenyasi Number One in the Asutifi North District of Brong-Ahafo Region.

With funding support from Star Ghana, the programme was the fifth in the series for the organisers and other stakeholders to move to galamsey endemic communities to among others educate the people about the essence of the formation of the Operation Vanguard by the government and their activities.

It was also to inform the people about the extent of the destruction of the country’s water bodies, lands and forests and the environment in general through galamsey activities, as well as the proposed Multilateral Mining Integrated Project (MMIP) to be implemented by the government to holistically benefit the nation, small scale miners and mining communities.

The first Townhall Meeting was held at Manso Nkwanta, second at Dunkwa on Offin, third at Kyebi and the fourth at Wassa-Akropong in the Ashanti, Central, Eastern and Western Regions respectively.

P/C Supt. Acquaye said beside the 39, the rest of the 515 offenders had been sent to Court, saying whilst some of them were being prosecuted, others are awaiting prosecution.

He expressed the hope that the sentences would be harsher and more deterrent to deter recalcitrant illegal miners and others wishing to join them from continuing with that nationally destructive and nefarious economic venture.

Mr. Kenneth Ashigbey, the Convener of the MCAG, observed that before 2010, galamsey activities was only limited to the use of manual implements like shovels and pick axes but since then it had changed as perpetrators were now using heavy equipment and machinery like bulldozers and excavators.

He said application of mercury, a poisonous chemical in the process was another dimension aggravating the situation and attributed the menace to leadership failure because politicians, chiefs and sometimes media practitioners were allegedly behind it.

Mr. Ashigbey thus praised President Akufo-Addo that he had shown “political courage” and if Ghanaians offered him the maximum support to prevent and eradicate the canker, he would be one of the greatest Presidents Ghana has ever had.

Nana Osei Kofi Abiri, Paramount Chief of Kenyasi Number One, commended the President Akufo-Addo for the crucial decision and the bold step to rid the country of galamsey operations because those activities had become a threat to national food security.

He also lauded the effort of the MCAG for untiringly supporting the government in that direction and therefore warned the residents in the traditional area to respect the ban as anyone who violated it would be arrested to face the full rigours of the law.