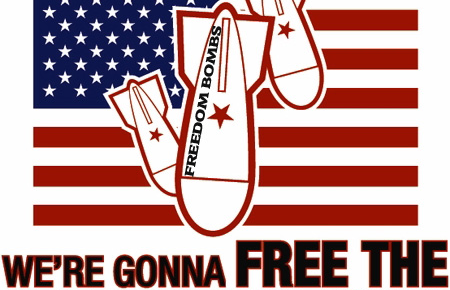 “All target regimes have one crime in common: Using their national resources to develop modern secular states – independent of imperial dictates.”

This is a pattern the west, the US, EU, and NATO have pursued in the Middle East in cooperation with the Gulf Cooperation Council, GCC. The US/EU/NATO coalition is extending brutal colonial attentions into Africa again.

All the target regimes of the US/EU/NATO/GCC aggression for “humanitarian intervention” and “democracy” share this characteristic, they were governing themselves independent of imperial dictates. This made and makes them ripe for “humanitarian” intervention. The same pattern in the Middle East is extending into Africa.

‘“Moderate” Islamists have become the Empire’s ‘contraceptive of choice’ against any chance the massive Arab peoples’ revolt might give birth to substantive egalitarian social changes and bring those brutal pro- western officials, responsible for so many crimes against humanity, to justice.

The West and their client officials in the military and police have agreed to a kind of “power-sharing’ with the moderate/respectable (read ‘reactionary’) Islamist parties. The Islamists would be responsible for imposing orthodox economic policies and re-establishing ‘order’ (i.e. bolstering the existing one) in partnership with pro-multinational bank economists and pro US-EU generals and security officials. In exchange the Islamists could take certain ministries, appoint their members, finance electoral clientele among the poor and push their ‘moderate’ religious, social and cultural agenda. Basically, the elected Islamists would replace the old corrupt dictatorial regimes in running the state and signing off on more free trade agreements with the EU. Their role would keep the leftists, nationalists and populists out of power and from gaining mass support. Their job would substitute spiritual solace and “inner worth” via Islam in place of redistributing land, income and power from the elite, including the foreign multi-nationals to the peasants, workers, unemployed and exploited low-paid employees.

The US and EU have openly unleashed their fundamentalists allies in order to destroy independent adversaries in the name of “democracy” and ‘humanitarian intervention’, a laughable claim in light of decade long colonial wars of occupation in Iraq and Afghanistan. All target regimes have one crime in common: Using their national resources to develop modern secular states – independent of imperial dictates.

As with European empires in the past, the modern Western imperial countries have relied on retrograde religious parties and leaders to collaborate and serve their economic and military interests and to provide mercenaries for imperial armies to savage any anti-imperialist social revolutionaries. In that sense US and European rulers are neither ‘pro nor anti’ Islam, it all depends on their national and class position. Islamists who collaborate with Empire are “moderate” allies and if they attack an anti-imperialist regime, they become ‘freedom fighters’. On the other hand, they become “terrorists” or “fundamentalists” when they oppose imperial occupation, pillage or colonial settlements.

Needless to say, wherever US imperialism faces leftists or secular, modernizing anti-imperialist regimes, Washington turns to retrograde Islamic leaders willing and able to destroy the progressive regime in return for imperialist support. Such coalitions are built mainly around fundamentalist and moderate Islamist opposition to secular, class- based politics allied with the Empire’s hostility to any anti-imperialist challenge to its domination.

The same ‘coalition’ of Islamists and the Empire has been glaringly obvious during the NATO assault on Libya and continues against Syria: The Muslims provide the shock troops on the ground; NATO provides the aerial bombing, funds, arms, sanctions, embargoes and propaganda.

What determines whether the US Empire will have a collaborative or conflict-ridden relation with Islam depends on the specific political context. The US allies with Islamists when faced with nationalist, leftist and secular democratic regimes and movements, especially where their optimal choice, a military-neo-liberal alternative is relatively weak. However, faced with a nationalist, anti-colonial Islamist regime (as is the case of the Islamic Republic of Iran), Washington will side with pro-western liberals, dissident Muslim clerics, pliable tribal chiefs, separatist ethnic minorities and pro-Western generals.”

The war on terror is particularly useful here. Terrorism is a tactic, it has no particular ideology. So it is easy to label any inconvenient opposition, any anti-colonial or anti-imperial movement as terrorists. It is then easy, almost a duty, to make war on them.

“Islamist parties are approached by the Empire’s policy elites only when they have a mass following and can therefore weaken any popular, nationalist insurgency. Mass-based Islamist parties serve the empire by providing “legitimacy”, by winning elections and by giving a veneer of respectability to the pro-imperial military and police apparatus retained in place from the overthrown client state dictatorships.

The Islamist parties compete at the “grass roots” with the leftists. They build up a clientele of supporters among the poor in the countryside and urban slums through organized charity and basic social services administered at the mosques and humanitarian religious foundations. Because they reject class struggle and are intensely hostile to the left (with its secular, pro-feminist and working-class agenda), they have been ‘half-tolerated’ by the dictatorship, while the leftist activists are routinely murdered. Subsequently, with the overthrow of the dictatorship, the Islamists emerge intact with the strongest national organizational network as the country’s ‘natural leaders’ from the religious-bazaar merchant political elite. Their leaders offer to serve the empire and its traditional native military collaborators in exchange for a ‘slice of power’, especially over morality, culture, religion and households (women), in other words, the “micro-society”.’

The French have been particularly explicit in their imperial intentions regarding the Middle East and Africa:
from: Libya: NATO Provides the Bombs; The French “Left” Provides the Ideology by Pierre Lévy, he quotes a 2007 speech by Sarkozy:

“Europe is today the only force capable of carrying forward a project of civilization. … America and China have already begun the conquest of Africa. How long will Europe wait to build the Africa of tomorrow? While Europe hesitates, others advance.”

Not wanting to be left behind, Dominique Strauss-Kahn around the same time expressed his desire for a Europe stretching “from the cold ice of the Arctic in the North to the hot sands of the Sahara in the South … and that Europe, I believe, if it continues to exist, will have reconstituted the Mediterranean as an internal sea, and will have reconquered the space that the Romans, or Napoleon more recently, attempted to consolidate.”

The Pentagon has been diligent in shoring up repressive regimes and helping to repress any democratic movements.

“As the Arab Spring blossomed … the Pentagon acted decisively. It forged ever deeper ties with some of the most repressive regimes in the region, building up military bases and brokering weapons sales and transfers to despots from Bahrain to Yemen.

As state security forces across the region cracked down on democratic dissent, the Pentagon also repeatedly dispatched American troops on training missions to allied militaries there. During more than 40 such operations with names like Eager Lion and Friendship Two that sometimes lasted for weeks or months at a time, they taught Middle Eastern security forces the finer points of counter-insurgency, small unit tactics, intelligence gathering, and information operations skills crucial to defeating popular uprisings.

These recurrent joint-training exercises, seldom reported in the media and rarely mentioned outside the military, constitute the core of an elaborate, longstanding system that binds the Pentagon to the militaries of repressive regimes across the Middle East. …

The process of imperial “humanitarian” intervention and “democratization” is outlined even more succinctly in this:

From libyasos:
“Introduction to Democracy

Independence, that crime against imperialism, can be successfully defeated!