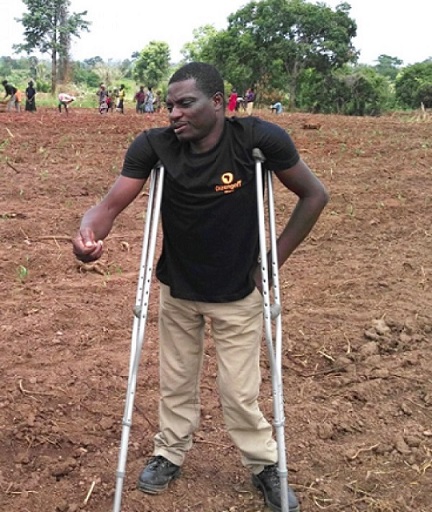 During his formative years, and coming from a poor background, his parents did not find it useful to educate a physically challenged son.

But, that did not discourage Kofi Vinyo from aspiring higher in life.

Determined to achieve his dreams of becoming an agro-processor in future, Vinyo believed ‘disability is not inability’, defied all odds and managed to acquire an Advanced Level Certificate in Accountancy.

It was then that he realised the prospects in agriculture, and strong in mind, Vinyo began to engage in commercial farm work in 2013.

Currently, he is the Managing Director of the Kofi Vinyo Company Limited, an agro-processing company at Kwatire, a farming community in the Sunyani West Municipality of the Bono Region.

By dint of hard work, the company has 50 acres of coconut, six million snails, 200 acres of cashew and over 100 acres of plantain and cocoyam, 20-acre chili pepper, and 10-acre ginger farm.

After conducting rigorous research work on the economic and health value and benefits of tiger nuts, he is now engaged, and specialised in commercial production and processing of tiger nuts.

Mr Vinyo said he strongly believed export of tiger nuts has huge potential for Ghana to revolutionise her agriculture sector, and widen her foreign exchange earnings.

Beginning from the cultivation of a few acres of tiger nuts in 2017, the agro-processing company, which employed 200 people, including casual workers, had 200 hectares of tiger nuts.

Mr Vinyo is now processing tiger nuts into powder and oil, and it has the capacity to process 20,000 litres of tiger nuts oil every month.

He said his company has sent samples of the product to the Kwame Nkrumah University of Science and Technology (KNUST), Kumasi for testing as a requirement.

It would subsequently be forwarded to the Food and Drug Authority (FDA) for certification before the tiger nut oil packaged in sachets, as well as one-litre and five litres containers would enter the local market.

For the meantime, Mr Vinyo said his market targets Ghana and Africa, and appealed to the government to assist him under its flagship One-District-One-Factory (1D1F) programme or consider building irrigation facilities for the company.

He said with government or investor support, the company could irrigate between 5,000 to 10,000 hectares, engage between 100,000 to 200,000 out-growers, to ensure all year production of tiger nuts.

With these support, and expansion of its factory, Mr Vinyo said the company could process between 200,000 to one million tiger nuts oil every year to meet local and international markets.

Interestingly, Mr Vinyo explained by-products from tiger nuts could be recycled into feed, fertilizer that would boost the poultry and livestock industries, and improved on the nation’s agriculture productivity as well.

The Physically challenged farmer said lack of financial support and irrigation facilities gave him sleepless nights, because these remained huge challenges that threatened his vision to turn into a reality.

Another potential challenge, he anticipated, was how the products could penetrate the local market, saying because many Ghanaians had little knowledge and did not know the health benefits of tiger nuts, they only regarded the crop as a snack or aphrodisiac.

Mr Vinyo’s immense contribution to the agriculture sector in the country has earned him both national and international recognitions.

He was awarded the National Best Maize Farmer in 2016 and National Physically Challenged Best Farmer in 2020.

At the international level, his company has received an Outstanding Organic Processing Company at the Second African Business Award, Best Locally-made Organic Food at Cemba Africa Award as well as Northern Investment Award.

“All what tiger nuts need to grow is water”, he said and called on the government and her development partners, local and foreign investors to invest in the sector.

Mr Vinyo said harvesting of tiger nuts was between 90 to 120 days, saying if the government prioritised the sector, his company could harvest the crop three to four times a year.

The Physically-challenged farmer indicated the crop was in high demand in Japan and the United States, saying because of its health benefits consumption was increasing in these countries, hence the need for the nation to prioritize and invest heavily into the sector.

This would make the sector attractive to the youth, improve commercial production and processing, as well as add value and export products to enhance the nation’s foreign exchange earnings.