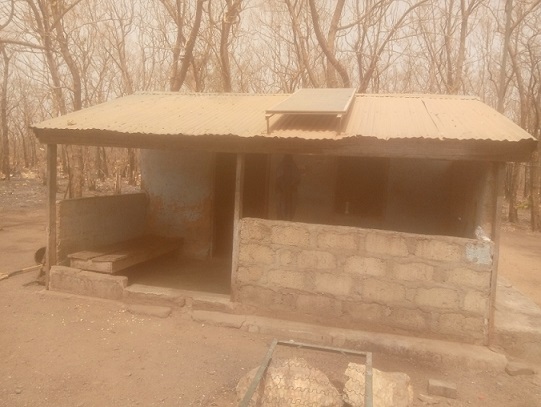 Police Personnel stationed at the Tilli Forest Police Post in the Bawku West District of the Upper East Region are living in a dilapidated small structure with no electricity.

The Tilli Forest Police Post is on the Bolgatanga-Bawku-Pulmakom road, between Sakoti in the Nabdam District and Zebilla in the Bawku West District.

The area has vast land with tall trees covering the stretch of the road from Sakoti to Tilli and the place is noted for high profile armed robberies and other criminal activities that have led to loss of lives and properties.

The stretch of the said road does not have street lights, thereby allowing criminals to hide in the forest and evade the police personnel to perpetrate crime.

When the Ghana News Agency paid a visit to the area, it observed that the structure had its doors and windows broken, while some of the roofing wood and sheets were damaged making it possible for water to flood inside of the building whenever it rained and rubbish could also be collected into the building whenever there was a strong wind.

The floor and walls also had some cracks.

The police personnel did not have any comfortable place to relax during the day except a torn canopy which could not form enough shade in the scorching sun.

Although the police declined to speak, some travelers told the GNA that the situation was not conducive for the personnel to execute their mandate of maintaining law and order and protecting lives and property.

Mr Dominic Asaana, a businessman who plies the road frequently noted that the structure of the police personnel needed urgent renovation and electricity to enable them have a proper place to stay and properly combat crime.

“I use this road almost all the time and sometimes I feel pity for our police officers. We understand they are doing their work, but it does not mean that they should live in this poor structure to be able to work effectively.
“There is no light in their building, no door or window, so it means that anytime it rains they cannot stay in it and animals including; wild animals can invade the room,” he said.

Mrs Faustina Ndego, a resident, said one of the reasons there was so much crime in the area was due to lack of street lights and appealed to the government to renovate the structure of the police post, connect with electricity and fix street lights along the stretch of the road to enable the police work effectively.