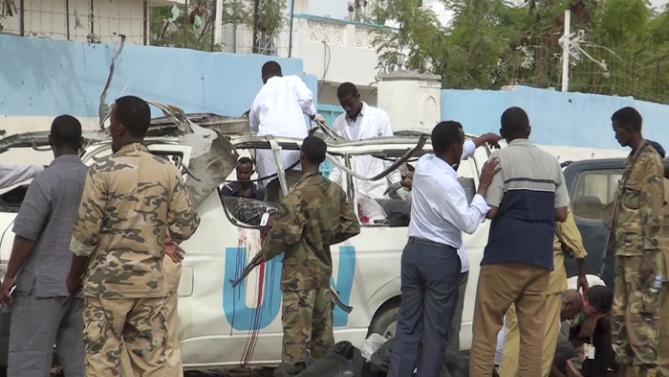 The UN top envoy in Somalia has called on the Horn of African nation’s leaders to forge unity on critical national issues for the benefit of their country.

James Swan, special representative of the UN Secretary-General for Somalia who held talks on Sunday with Somalia’s semi-autonomous region of Puntland State president Said Abdullahi Deni and members of his cabinet in Garowe also called for resumption of ties between Mogadishu and all federal member states, according to a statement issued on Monday.

He urged all Somalis to work together toward achieving consensus on issues of critical importance, such as completion of the constitutional review, organization of national parliamentary elections, achievement of debt relief, and advancement of security gains against al-Shabab.

“Progress on these national issues requires an inclusive, sustained dialogue across all segments of society and at all levels of government – especially between the Federal Government and Federal Member States,” Swan said.

He said Sunday’s visit provided another welcome opportunity for him to hear first-hand from Puntland’s leadership about the progress being made with its ambitious agenda.

Swan lauded Puntland for its ongoing efforts to degrade al-Shabab, relying mainly on its own forces and financial resources.

“We continue to urge efforts to address differences over Sool and Sanaag through dialogue, with a view to peaceful resolution,” said Swan.

“I am confident that, under President Said Deni’s leadership, Puntland can play a constructive role in advancing national priorities,” said the UN envoy.

Swan lauded Puntland’s leaders for the recent successful investment conference and the start of the Ethiopian Airlines flights to Garowe, noting that these developments were positive signals of economic revival in Puntland.

“Puntlanders are rightly proud of the progress they have made in the past 21 years, since the establishment of their constitution, a first among Federal Member States,” Swan said.

President Deni and the team also described their preparations for a new Puntland Development Plan and the work of the Transitional Puntland Electoral Commission (TPEC).

“These are solid examples of the Puntland government’s commitment to economic and social development, and to democratization, which we applaud,” said Swan. Enditem