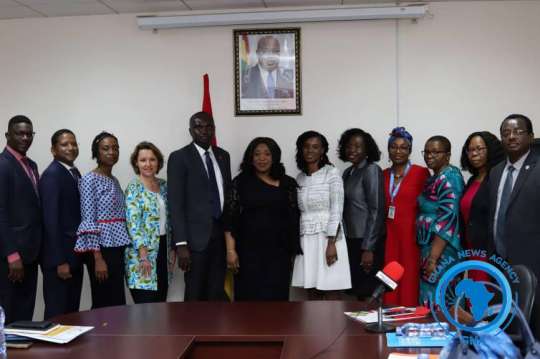 Madam Sylvia Lopez-Ekra, the United Nations Resident Coordinator, together with Heads of UN agencies in Ghana have paid a courtesy call on Madam Shirley Ayorkor Botchwey, the Minister of Foreign Affairs and Regional Integration in Accra.

A statement issued by the Ministry of Foreign Affairs and Regional Integration and copied to the Ghana News Agency said Madam Ayorkor Botchwey in her deliberations with the Resident Coordinator and her team, acknowledged the efforts of the UN Resident Coordinator in scheduling a meeting to deliberate on the partnership between the UN and the Government at the beginning of the year.

The Minister indicated that the timing was a good opportunity to review the relationship between the two parties.

Madam Ayorkor Botchwey took the opportunity to congratulate the UN Development Programme (UNDP) for coordinating a successful UNDP Senior Management Cluster Meeting in Accra in the latter part of 2019.

She stated that the Ministry of Foreign Affairs and Regional Integration continues to play the vital role of coordinating the activities between the UN Agencies and the ministries, departments and agencies of Ghana.

Madam Ayorkor Botchwey underscored the need for a dialogue between the UN Country Team and the Government of Ghana (MDAs) each year to ascertain the areas of priority of the Government and the level of assistance and coordination that may be available in respect of the Five-Year Partnership Programme targeting the achievement of the SDGs.

She expressed appreciation for the continued technical support of UN to the Government and emphasized that the cooperation between the two sides could be enhanced through dialogue to address the peculiar needs of Government towards the achievement of the 2030 Sustainable Development Goals.

She noted that there were areas of concerns that each UN Agency might have with respective MDAs under their purview.

She also noted with appreciation the development of Ghana’s Coordinated Programme of Economic and Social Development Policies (CPESDP) for 2017-2024, which is based on the sustainable development goals (SDGs), from which the UN Country Team developed and adopted the United Nations Sustainable Development Partnership (UNSDP) 2018-2022.

The Minister noted that given Ghana’s development challenges, it was appropriate for the five-year programme to focus on providing capacity building for enhanced leadership and promotion of multi-stakeholder approaches for the implementation of the 2030 Agenda in Ghana.

She took the opportunity to encourage the various Heads of Agencies to endeavour to meet with the respective MDAs with which they had direct working relations.

She indicated that the Ministry of Foreign Affairs was committed to facilitating partnerships and enhancing coordination between the UN and the Government.

With regard to human rights, the Minister stated that Ghana remains committed to the promotion and protection of the human rights of all persons in Ghana and would continue to be engaged on the matter in the multilateral sphere.

Madam Ayorkor Botchwey indicated that the Ministry of Justice and Attorney General’s Department and allied Government Departments and Agencies together with the non-governmental organizations were currently examining the recommendations made to Ghana during the third cycle of the Working Group of the Universal Periodic Review (UPR).

She further indicated that the delegation of Ghana was currently participating in the 43rd Session of the Human Rights Council and had thus far engaged on several matters of concern particularly in-country human rights situations.

Touching on migration, the Minister commended the International Organization for Migration (IOM) for assisting the Government to develop the Standard Operating Procedures for Reintegration of Returnees in Ghana and acknowledge the collaboration between the organization and the Ministry, particularly through our Missions abroad.

She expressed appreciation for IOM’s partnership with the Ministry and the continued support for capacity building for Consular Officers in Missions particularly in the Gulf States, as well as facilitating the safe and dignified return of vulnerable Ghanaians abroad, and their reintegration.

On engagement with Ghanaian diplomats, Madam Ayorkor Botchwey said Heads of Mission and officers actively participate and report on UN meetings, briefing sessions and dialogues on all critical and sensitive issues.

“The Ministry would, therefore, encourage Heads of Missions to further engage UN Agencies during their visits to Accra, in order to facilitate the exchange of critical information”.

Concerning South-South Cooperation and South-South Knowledge Exchange, the Minister explained that Ghana had been one of the most influential and articulate advocates for regional and continental development.

She said Ghana would continue to share knowledge and experiences on pertinent issues such as migration, diaspora engagement, electoral Administration and Peace building processes.

She cited the significant role President Nana Addo Dankwa Akufo Addo played in the peace negotiation of Togo, culminating in the recent successful elections in Togo.

On Agriculture and Trade, she stated that the Government was aware of the Food and Agriculture Organisation (FAOl Bi-Annual Regional Conference for Africa (ARC) that would take place in Victoria Falls, Zimbabwe towards the end of March 2020 and mentioned that the President had currently suspended all foreign travels for public officials as part of measures to prevent the outbreak of the Coronavirus (COVID-19) in the country.

She further stated that Ghana’s Mission in Harare might be tasked to follow proceedings and report accordingly.

Concerning HIV/AIDS, Madam Ayorkor Botchwey stated that after Ghana’s chairmanship of the Programme Coordinating Board (PCB) of UNAIDS in 2017, the delegation of Ghana in Geneva and New York had always engaged on matters related to the fight against HIV/AIDS.

She informed the UN Country Team that Ghana was Vice-Chair of the Programme Coordinating Board of UNAIDS in 2016 at the adoption of the last Political Declaration on HIV/AID and particularly assured the Country Director of UNAIDS that Ghana would remain engaged in the negotiation process of the resolution by the Committee on the Status of Women, the girl child and HIV and AIDS.