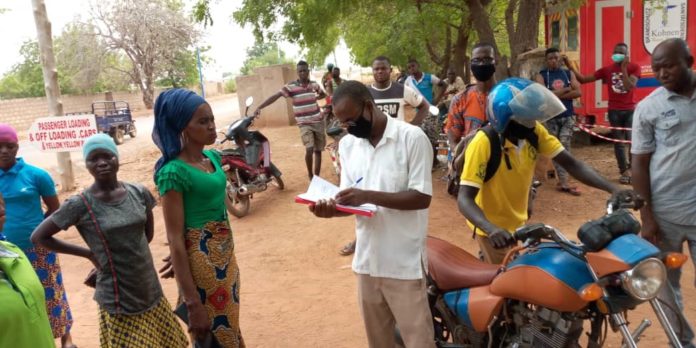 The United Nations Population Fund (UNFPA) through the Purim African Youth Development Platform (PAYDP), has enrolled 60 ‘kayaye’ ( headpotters) into formal and informal educational institutions to enable them to realise their goals.

The beneficiaries, who exhibited their potential at the “Kayayei Business & Leadership Fair 2021” in Accra on Thursday, are young ladies pursuing degrees in the nursing and midwifery training schools, and colleges of education.

The rest were trained in vocational skills like bead making, fashion designing, hair dressing, production of body and hair creams and antiseptics.
Ms Sandra Akweley Martey, the Gender Equality, Inclusivity & Fashion Consultant, UNFPA, said the Fair was a celebration and a call to action, as well as a moment to admire the potentials of the kayaye.

In partnership with the PAYDP, she said, they had outlined programmes to end teenage pregnancies, maternal death among the vulnerable and ensure that vulnerable people fulfilled their dreams.

Ms Martey disclosed that the UNFPA would through one of its global interventions, sponsor a kayaye to pursue fashion designing in the New York.

Mrs Aku Xornam Kevi, the Executive Director, PAYDP, said there were about 100,000 kayaye in the streets, some defiled and raped regularly.

“Some of them are raped and defiled and the major reason for, which they come to the cities is to flee from abduction for child marriage,” she said.
One of the obstacles to the implementation of their projects, she said, was the conduct of some chiefs or opinion leaders in the target communities in the Northern Ghana.

“We realised the chiefs in their communities themselves are getting married to underaged girls and that made it difficult for them to cooperate with us to execute our projects.

“Sometimes we also find it challenging to make an impact when the girls themselves, are interested in the marriage and deny their tender age and claim not to find her birth certificates,” Mrs Kevi noted.

The UNFPA and PAYDP, had therefore, set up the ‘Oranging Girls Network’ to sensitise chiefs and opinion leaders and girls to put an end to child marriage.

Madam Cecilia Abena Dapaah, the Caretaker Minister of Gender, Children and Social Protection, said Ghana had a young age structure with 57 per cent of the population under 25, and that with dynamism and focus, young people could transform the fortunes of the economy.

Empowering women afforded them the opportunity to showcase their talent and utilise their knowledge to the benefit of society, she said, and encouraged the implementers of the programme to remain focused and support more vulnerable people in the society.

Ms Zulufao Awudu, a kayaye and beneficiary of the integrated programme, said: “I didn’t have faith in UNFPA when I joined them. They asked what we wanted, and I told them I wanted a sewing machine. Now they have enrolled me in a fashion designing training institution, and I can also wear uniform to go and learn. I believe I will soon be a master to train others too and become a self-reliant woman.”

Ms Sala Abudu, a 23-year-old kayaye, also, a beneficiary, said: “I was sleeping at Tudu-Aflao station as a kayaye and before I came to Accra as a kayaye, I had totally given up on education because of financial problems. One day I attended a UNFPA mentorship training and got empowered.
“So I decided to go back to school, I wrote the WASSCE and had ‘6As’ and ‘2Bs’, and through the help of UNFPA and PAYDP, I bought University of Ghana forms, got admission into College of Nursing and Midwifery and I am now pursuing a degree there,” she added.

Ms Amdaratu Baba, another beneficiary said: “I live at Darkuman and I was doing kayaye there. So, it’s a woman there who talked about UNFPA to us. I joined and now I have been trained to do beads, liquid soap, and many other things. They have enrolled me in hair dressing training too. If not for UNFPA, I will be nobody.

“At first, my family saw nothing good in me and found me useless but now they regard me as somebody important too in the family.”

On the part of Ms Mavis Owusuaa, a beneficiary from Tachiman, Bono East Region, she narrated how UNFPA had given her hope.

“I was in SHS 2 when I gave birth, and they came in to empower me to go back to school as that wasn’t the end of my life. So, I gathered courage, went back to school and I was going home in between to breastfeed my daughter every day.

“I didn’t look back while some people were gossiping about me. I was focused in life. I wrote my WASSCE and passed. I bought a nursing form and now I am in a Nursing Training college and being funded by UNFPA. I have also been given vocational skills”.