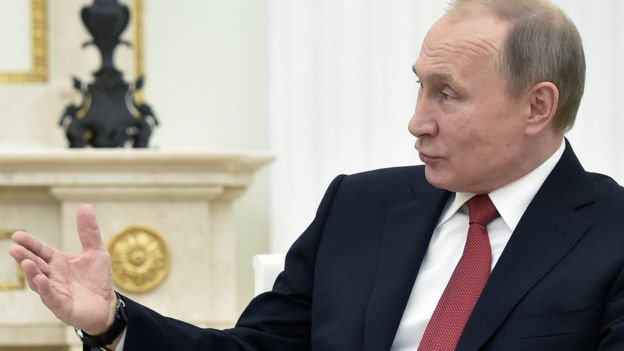 President Barack Obama has said that he ordered Russia’s Vladimir Putin to “cut it out” in a conversation about email hacking ahead of the US election.

Implying that the Russian president knew about the hacks, Mr Obama said: “Not much happens in Russia without Vladimir Putin.”

The president said he had warned Mr Putin of serious consequences at a summit in September.

A month later, the US accused Russia of meddling in its democratic process.

The president has promised a “proportional” response to the hacking of the Democratic Party and of emails belonging to defeated presidential candidate Hillary Clinton’s campaign chairman.

He appeared to suggest that the US could go on the offensive with its own cyber muscle, stating: “Whatever they do to us, we can potentially do to them.”

Mr Obama’s comments came during his last news conference of the year. The president did not criticise his successor, Republican Donald Trump, by name, but said some Republicans were failing to acknowledge the seriousness of Russia’s involvement in the US election.

He also expressed bewilderment over GOP supporters who say they approve of Mr Putin, declaring: “Ronald Reagan would roll over in his grave.”

The president urged Mr Trump to back a bipartisan investigation into Russian cyber intrusions.

Earlier this week, Donald Trump poured scorn on US intelligence claims that Russian hackers helped swing the election in his favour, calling them ridiculous and politically-motivated.

He tweeted: “Can you imagine if the election results were the opposite and WE tried to play the Russia/CIA card. It would be called conspiracy theory!”

CIA Director John Brennan told employees on 16 December that the FBI agrees with the CIA’s conclusion that Russia’s goal was to help Mr Trump win.

The Kremlin denies US claims that Russia hacked official emails, and has called them “indecent”.

“They need to either stop talking about this or finally present some sort of proof,” Mr Putin’s spokesman said.

The Kremlin’s response came as Mrs Clinton attributed her election defeat to Russian hacking for the first time.

She told party donors that President Putin had a “personal beef” against her for describing Russia’s parliamentary elections five years ago as rigged.

She also cited the release of a letter by FBI director James Comey as having lost her close races in key states. 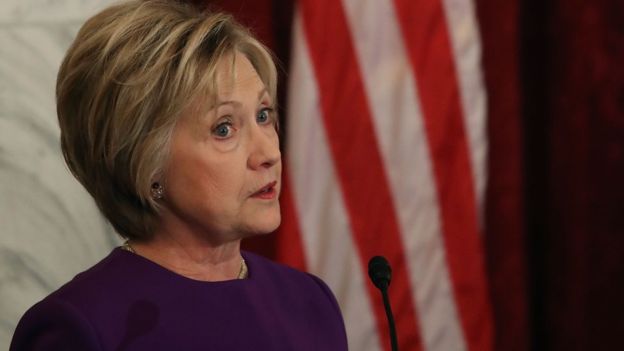 Mr Comey made headlines when he announced a new inquiry into Mrs Clinton’s email server 11 days before the presidential election. The matter was dropped two days before Americans voted.

The FBI had previously concluded that Mrs Clinton had been “extremely careless” over her use of a private email server while secretary of state, but there were no grounds for any charges.

The New York Times said Mrs Clinton’s comments were her first on the subject since widespread reports of the hacking surfaced before the election.

“Putin publicly blamed me for the outpouring of outrage by his own people, and that is the direct line between what he said back then and what he did in this election,” Mrs Clinton said, quoted by the Times.

“This is not just an attack on me and my campaign, although that may have added fuel to it. This is an attack against our country. We are well beyond normal political concerns here. This is about the integrity of our democracy and the security of our nation.”

More than 19,000 internal Democratic National Committee emails, published byWikiLeaks on 22 July, appeared to show party officials tried to thwart the campaign of Mrs Clinton’s rival, Bernie Sanders.WikiLeaks published swathes of emails in October and November from the account of Mrs Clinton’s campaign boss, John PodestaAmong the most damaging revelations were suggestions that donors to the Clinton Foundation gained special access to former President Bill Clinton, and that Mrs Clinton had maintained a closer relationship with Wall Street bankers that she admitted on the campaign trail