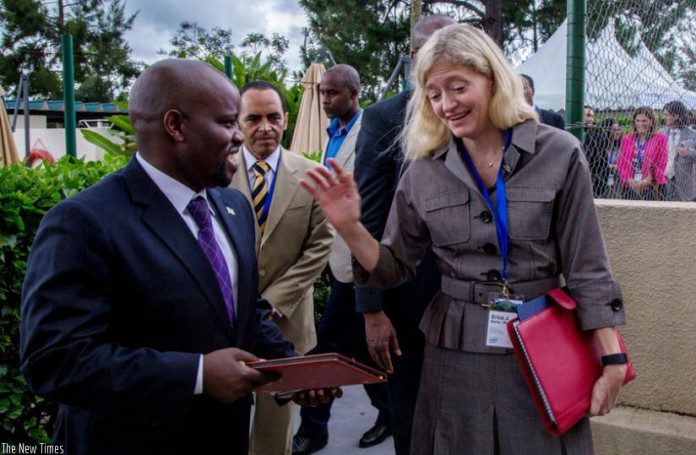 The Minister of State in charge of TVET, Albert Nsengiyumva, said this last Friday following the closure of a two week training of trainees (TOT) for teachers in technical and vocational schools from Western Province.

The training was held from August 3 to 14 at the Integrated Polytechnic Regional Centre (IPRC) West in Karongi District.

The minister said the first three years of the project, which are ending this year, have seen five Vocational Training Centres (VTCs) built in the Western Province districts of Rusizi, Nyamasheke, Karongi, Ngororero and Rutsiro.

He said the project, worth $10 million, also included training of teachers and helping transformation-driven cooperatives.

Two more TVET schools will be built in the province during the next phase, he said.

?In the next phase, which is also three years starting from next year, they will build VTCs in Nyabihu and Rubavu districts. But the biggest part of this phase  will be dedicated to enhancing the quality (of skills) and job placement. This means planning various projects which can make students from TVET get jobs or create their own,? Nsengiyumva said, adding that talks are ongoing about the project costs and priorities.

The training, attended by 115 teachers, was intended to equip participants with relevant skills. Trainers included experts from Rwanda and Switzerland.

The trainees included 19 in Motor Vehicle Mechanics (MVM), 17 in Electricity, 16 in Culinary Art, 18 in Masonry, and 50 in Pedagogy.

?We want to enhance hands-on skills, because this is the challenge we are facing. Our teachers lack practical skills. So, we want them to acquire those skills so that they can teach not only on the board, but also in practicals,? the minister said.

He said similar training would be extended to other districts as part of efforts to fill the skills gaps.

Alfred Gl?ser, a senior Swiss expert in electricity, said he was optimistic trainees would apply the acquired skills to impart into students skills that are needed on the market.

?What they need is being motivated, liking what they do and do what they like as well as having in mind what to accomplish with students,? he said.

?There are skills that we did not get from school which Imanaged to get them here through practical courses.  We learnt how to use professional machines at IPRC West, which are not available in our school. I hope to improve a lot in personal ability and skills transfer,? said Jean Marie Vianney Mfashwanimana, a teacher in Motor Vehicle Mechanics from  VTC Muramba in Ngororero District.