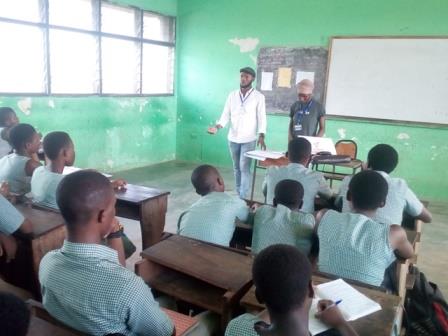 The VSO ICS Alumni Association Ghana, a volunteer group at the weekend embarked on a sensitisation campaign to educate students of Ada Senior High School on the Sustainable Development Goals (SDGs).

Mr Benjamin Ayine Sarfo, the Secretary for the Association in an interview with the Ghana News Agency said the programme was to expose and create awareness about the SDGs among the students and encourage them to make a change in their communities.

He said the event was also to promote the activities of the association to the students and inspire them to be active citizens as well as create voluntary opportunities for them.

Mr Sarfo, who is also the Project Lead for the SDG Campaign believed that the students were future leaders and there was the need to get them to understand the goals and contribute their quota to its attainment.

The students were divided into 17 groups, to discuss each of the SDGs, spearheaded by the volunteers.

In each of the groups, the students were grouped into sessions to discuss their understanding of the goals and how they could contribute in achieving those goals and make an impact in their communities.

Ms Bridget Ocansey and Kojovi Afandzinam, Team Leaders for group one discussing the first goal ‘No Poverty’, explained to the students that eradicating poverty in all forms remained one of the greatest challenges facing humanity.

They said the number of people living in extreme poverty dropped by more than half between 1990 and 2015 from 1.9 billion to 836 million, and that more were still struggling for the most basic human needs.

They educated students that the SDGs were bold commitments to end poverty in all forms and dimensions by 2030 which involved targeting the most vulnerable, increasing access to basic resources and services, and supporting communities affected by conflict and climate-related disasters.

Ms Gladys Baidoo, Team Leader for group two, touching on the second goal ‘Zero Hunger’, told the students that the goal aimed to end all forms of hunger and malnutrition by 2030, and ensure that all people especially children had access to sufficient and nutritious food all year round.

Ms Abiba Ibrahim and Sefakor Fekpe, the Team Leaders for group four, explaining on the goal four ‘Quality Education’, said by 2030, government must ensure that all girls and boys complete free, equitable and quality primary and secondary education leading to relevant and effective learning outcomes.

They said the goal also enjoined authorities to ensure that all youth and a substantial proportion of adults, both men and women, achieved literacy and numeracy.

Ms Berlinda Amenu, a student of the school expressed her delight for the education since that was the first time she heard about the SDGs, adding that she was enlightened about the causes and effects of poverty.

“With the knowledge acquired, I am aware that education was critical to ending poverty and I pledge to take my studies seriously for better future”, she added.

Master Cyril Nana Afriyie, also a student, commended the organisers for the programme and that he was challenged to focus on his talent and do it better as well as ensure proper sanitation practices for healthy living.

The 17 SDGs, build on the successes of the Millennium Development Goals to end poverty, protect the planet and ensure that all people enjoy peace and prosperity.

The goals provide clear guidelines and targets for all countries to adopt in accordance with their own priorities and the environmental challenges of the world at large.
GNA/Newsghana.com.gh