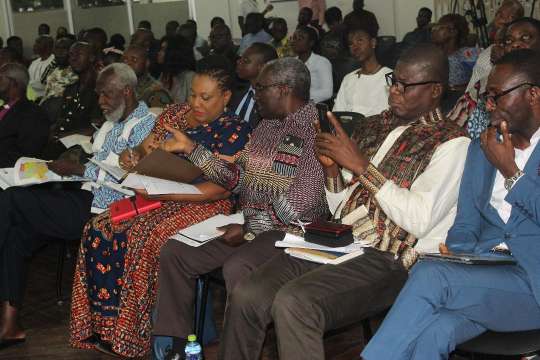 Dr Charles Wiafe-Akenten, Senior Lecturer, Department of Psychology, University of Ghana, has called for a concerted effort to rekindle the country’s societal values for a sustained national development.

He said the country needed to work on its value system for a comprehensive socio-economic development, and called for the re-introduction of traditional values which enhances relevant and utilitarian values.

The forum was organised by the National Development Planning Commission in partnership with the United Nation Development Programme and Ghana Eximbank.

He said Ghana was blessed to have evolved values which enhance political and socio-economic development in the past, but have not been successful in maintaining and transforming them into attitudes and habits to dominate our thoughts, discourse and actions to the desirable threshold.

Dr Wiafe-Akenten explained that this lack of apparent coherent dominant values had been one of the bane of the country’s development in recent times.

“As a society, we do not lack the knowledge, expertise and all that it takes to become a developed country, but the corresponding values seem to be lacking,” he said.

He expressed concern about the nation’s dwindling societal values, which had contributed to the current socio-economic, political and other societal ills of the country.

According to him, values such as nationalism, patriotism, honesty, respect, discipline, sense of oneness and hard work among Ghanaians had fallen and there was the need to restore these positive values for sustained national development.

He said the disrespect for law and order, indiscipline on our roads, corruption and other social vices must be checked to ignite the old values of discipline and love for the country.

Mrs Josephine Nkrumah, Chairperson, National Commission for Civic Education, said Singapore succeeded in the last fifteen years, because the people trusted in the country’s core values of honesty, integrity and others, and not just because of the country’s excellence in infrastructure, good policy and hard-working people.

She said it was imperative for Ghana to learn from Singapore to consolidate the gains of societal values.

Most Reverend Dr Aboagye Mensah, former Presiding Bishop, Methodist Church of Ghana speaking during a panel discussion on the topic stated that values were needed in every institution for democratic processes, stressing that the oral integrity of systems was critical for national development.

He said the inability to speak the truth by some Pastors had affected Christian values and called for a proper Biblical training for such Clergymen before starting a Church.

Professor Joseph Osafo, Head, Department of Psychology, University of Ghana, called for the need to strengthen the country’s laws and reward people who exhibited high sense of attitudes and behaviours.

He said good societal values could guide the country to the path of development if churches, predominantly preached message of good citizenships, integrity, and positive attitudes because of the captive number of audience it possessed.

Some of the participants urged government to introduce Civic Education to inculcate civic responsibility in pupils at the early stages through to workers in all institutions.

Others called on the government to regulate the alcoholic beverage advertisements, which had negative impact on children, scrutinize films on televisions which featured nude images.

They also advised parents to keenly spend time with their children to train them morally and uprightly.