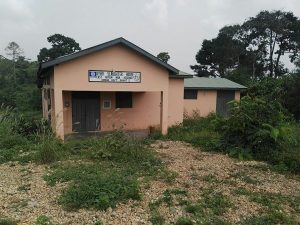 Residents of Kibi in the East Akim municipality of the Eastern Region have abandoned a World Bank sponsored slaughter house which was meant to facilitate the hygienic processing of meat in the area.

The facility which was commissioned in October 2015 by Simon Asirifi is yet to be used despite several complaints by residents within the Municipal Assembly.

It is gathered that the facility lacks source water supply, electricity as well as a biogas to provide fire for the operations of butchers.

Assembly member for the area, Kwame Asiedu Bekoe expressed worry at the situation and threatened to take the contractor and Municipal Assembly to court for the poor work done.

“I have intention to ask enquiry into the contract since I personally have issues with it. I learnt it was awarded to a teacher who has no skills which is also questionable.” He said.

Sources also reveal the facility which was funded by the World Bank under the Urban Development Grant II,was awarded to five different contractors which he noted is outrageous.

Identification of streets with foreign names sparks anger in Ledzokuku