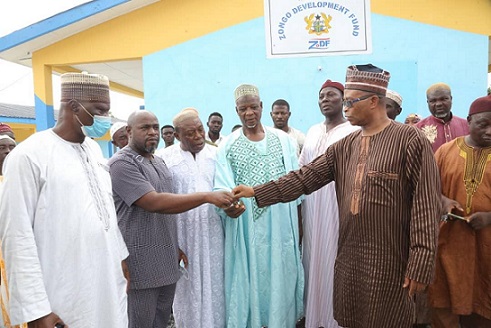 The Zongo Development Fund has commissioned projects that will impact the lives of Zongo people in terms of increase in school enrollment, improvement in sanitation, healthcare and promotion of security.

A statement copied to the Ghana News Agency in Accra on Thursday said the Fund had earlier embarked on a similar exercise in the Northern and North East regions after the initial commissioning in Accra.

In the Central region, Dr. Abdulai handed over a mechanized water system in Opeikuma Zongo; a fully furnished ICT Lab in Cape Coast Zongo; a modern toilet facility at Komenda Zongo, among others.

The statement said In the Volta Region, the ZoDF commissioned an ICT centre at Ho in the Volta Region; a health centre at Kpando; mechanized water systems in Dambai and Nkwanta in the Oti Region; a six-unit classroom block in Akenten Fulani Zongo in the Eastern Region and a mechanized water system in Asesewa in the Eastern Region.

At the ceremony to hand over a mechanized system in the Efutu Senya Metropolis, Dr. Abdulai emphasized the determination of the Fund to improve conditions in Zongo communities through the provision of basic social services and infrastructure.

He said the ZoDF had completed the construction of 200 projects and 500 others were at various stages of completion.

According to the statement, the promulgation of the Zongo Development Act 964(2017) was a clear indication of the resolve of the administration of President Nana Addo Dankwa Akufo-Addo to ensure the sustainability of the Fund and the performance of the Fund since its establishment had brought significant improvements in the lives of beneficiary communities.

It said during a programme to hand over a Six-unit classroom block at Manso Amenfi Zongo, Dr. Abdulai told the gathering of Chiefs, Imams, teachers and pupils of the determination of the Fund to bridge the gap between Zongos and other communities by providing schools, mechanized water systems, places of convenience, community sports and social centres (astro turfs) and financial support to brilliant but needy students.

At the palace of the Chief of Koforidua Zongo, the CEO informed them of the numerous projects executed in the region such as an ultra-modern library complex at Nsawam Adoagyiri; a Six-unit classroom block at Boadua Zongo, Akwatia; a toilet facility at Anweaso Zongo; a mechanized Water System at GCD Quarters, Akwatia; a Community Sports and Social Centre at Akim Oda Zongo and another school block at Nsuakwa Zongo, Adeiso.

On his part, Alhaji Baba Sadiq, who led a team to the Volta Region, Oti Region and parts of Eastern Regions, reminded the people that the ZoDF was established by the NPP government to bridge the development gap between the Zongo communities and other communities in the country.

He said, the projects such as schools, health and sanitation projects were meant to empower the people with knowledge, relevant skills and infrastructure to compete favourably with members of the other communities.
Chiefs, Imams laud ZoDF.

The Chiefs and Imams in the various beneficiary communities lauded the ZoDF for extending development projects to their respective areas.

They said the school blocks would decongest existing classrooms, the furniture would provide comfortable sitting arrangements, the water systems would give them clean water and reduce the hustle that they go through in search for water while the toilet facilities would eliminate open defecation.

The statement said at the handing over of an ICT lab in Cape Coast, Alhaji Mahmoud Dandey extolled Dr Arafat and expressed the “deep appreciation and gratitude” of the community for the provision of the facility.

He said the facility would afford pupils/students of the Failahiya Islamic Basic School an “excellent advantage” in ICT education.

Speaking at the commissioning of a mechanized water system in Dwinase Zongo, Wiawso in the Western North Region, Sheikh Ahmed Adam recounted how the community used to share contaminated drinking water with cattle and ‘’upsurge of water-borne diseases.”

He said the provision of the facility by the Zongo Development Fund had “improved lives significantly.”

For his part, Alhaji Abubakar Yaro said water tanker services were the only means of obtaining water by the community, prior to the construction of the mechanized drinking water by the ZoDF.