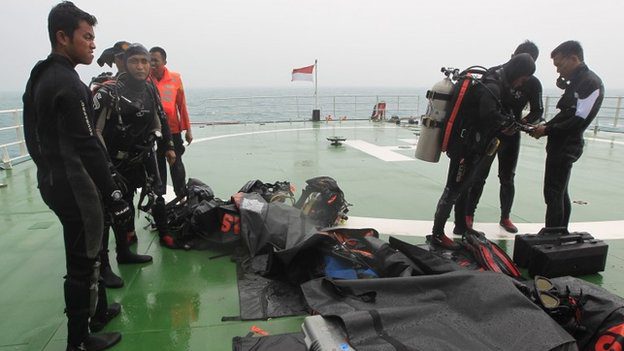 The flight from Surabaya, Indonesia to Singapore crashed into the sea on 28 December ? 37 bodies have been recovered out of 162 people on board.

Officials believe they may have located the tail, which holds the ?black boxes?, and parts from the fuselage. But poor weather has repeatedly delayed efforts to reach and identify the debris and bring it to land.

It is still not known what caused the crash and despite a massive search the main part of the plane has not been found.

Speaking in Jakarta on Tuesday, the head of Indonesia?s search and rescue agency Henry Bambang Soelistyo said teams were ?adding to and expanding the priority search area? as of Tuesday.

The weather had improved, he said, so underwater devices had been deployed, while divers had been able to dive lower into the search area.

Indonesia Air Force Lt Col Jhonson Supriadi said the weather was ?pretty good? on Tuesday, although he expected it to ?get uglier again? later in the day.

Dozens of ships and aircraft are involved in the operation, with Chinese rescue ship and a US Navy vessel joining the mission on Tuesday.

The focus is an area of sea about 90 nautical miles off Borneo, where several large objects which could be from the missing jet have been detected in shallow waters.

Divers sent down to investigate debris have been faced zero visibility because of strong currents and rough seas.

Remotely operated cameras were being used to try to photograph the objects, but waves up to 5m (16ft) high and strong currents made their use difficult.

There were 137 adult passengers, 17 children and one infant, along with two pilots and five crew, on the plane ? the majority Indonesian.

The families of the passengers have been offered a chance to fly to the location believed to be the crash site and lay flower wreaths, the commander of the Armed Forces, Gen Moeldoko, said in Surabaya.

They would fly to Pangkalan Bun, the nearest town, then be taken by a naval ship to the location in the Java Sea. He said he believed this might help ?reduce their sadness and the feeling of loss?.

Gen Moeldoko also assured the families that all the victims would be identified regardless of their condition when found.

Officials have said the plane was travelling at 32,000ft when the pilot?s last communication was a request to climb to 38,000ft to avoid bad weather.

It has emerged that AirAsia did not have official permission from Indonesia to fly the Surabaya-Singapore route on the day of the crash, but was licensed on four other days of the week.

The Indonesian authorities have now suspended the company?s flights on this route pending an investigation.

AirAsia ? which previously had an excellent safety record with no fatal accidents involving its aircraft ? said it would ?fully co-operate?.

At a press conference on Monday, Djoko Murjatmojo from the transportation ministry said officials at the airport operator in Surabaya and air traffic control agency who had allowed the flight to take off had been moved to other duties.

The ministry has also issued a directive making it mandatory for pilots to go through a face-to-face briefing by an airline flight operations officer on weather conditions and other operational issues prior to every flight.

Dabala Police rearrest one inmate, search for two others