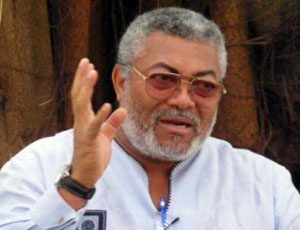 He was twice the head of state of Ghana and was the 1st President of the Fourth Republic. He first appeared on the Ghanaian political scene on 15 May, 1979 when he led a group of junior officers in the Ghana Air Force in an unsuccessful coup d’état that resulted in his arrest and imprisonment. He was court-martialled in public and sentenced to death.

Due to his display of patriotism in his defence speeches, he was widely seen across the country as a true son of Ghana, and was nicknamed Junior Jesus for his initials “JJ”.

Before he could be executed, another group of junior officers within the Ghana Army led by Major Boakye-Djan, overthrew the then military government of Lieutenant General Fred Akuffo in a bloody coup on June 4, 1979. Major Boakye-Djan and his men also set Rawlings free from detention, and installed him as head of the new government – the Armed Forces Revolutionary Council (AFRC).

At the time of the coup, Ghana was already far into the process of returning to civilian rule and general elections were already scheduled. Hence, the AFRC went ahead to conduct an election and handed over power to Dr. Hilla Limann who won the popular vote in the election to establish the short lived Third Republic.

Less than two years later, Dr. Limann’s civilian and constitutional government was overthrown again by Jerry Rawlings on 31 December, 1981. He then installed the Provisional National Defence Council (PNDC) regime. In all, Jerry Rawlings performed three coups d’état in Ghana, two of which were successful.

He switched from being a military Head of State, retired from the military, then ran and won in the 1992 elections which the opposition New Patriotic Party (NPP) claimed was a stolen verdict although international observers judged the elections largely free and fair.

After two terms in office, he anointed his vice-president John Atta Mills as his choice to replace him as President who lost to the opposition NPP’s candidate, John Kufuor.

Rawlings married his childhood sweetheart Nana Konadu Agyeman-Rawlings and had four children: three girls and a boy. He is the joint recipient of the 1993 World Hunger Award.

He held several international appointments after his political career including the AU High Representative for Somalia.

Mr. Rawlings undertook advocacy work to further mobilize the continent and the rest of the international community to fully assume its responsibilities and contribute more actively to the quest for peace, security and reconciliation in Somalia, a country battered by a long and bitter civil war.