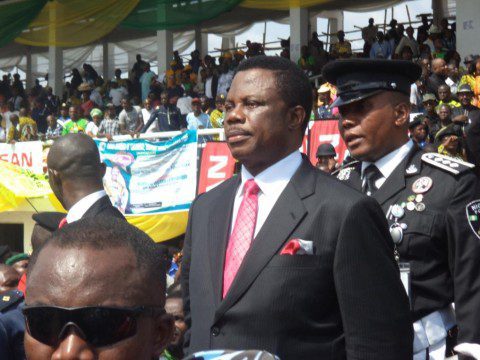 Gov Willie Obiano of Anambra state has in keeping with his promise to stimulate increased productivity in the state’s workforce by creating the enabling environment and raising the morale of workers presented four brand new Toyota Coaster buses for the daily transportation of the civil servants across the state.
Making the presentation to the Head of Service, Mr. Chidi Ezeoke at the Government House yesterday, the governor charged the workers to rededicate themselves to service and commitment to the development agenda of the administration.?He stated that the gesture was in fulfillment of his earlier promise to the workers during his maiden meeting with them last month.
According to him, ?civil servants play fundamental roles in the success of every administration and they should be encouraged with necessary logistics that will make their work easier. I believe that these buses will help to alleviate your transport difficulties, and ensure that you report to work early.?
He assured that his administration was ready to fulfil all the promises he had made but that in return, the workers must turn over the new leaf, emphasizing the need for punctuality and greater commitment from the entire workforce.
The buses will be plying four (4) designated routes every work day. The routes include Onitsha to Awka, Nnewi to Awka, Ekwulobia to Awka and Otuocha to Awka.
The Governor further assured that government would fast track the completion of the 1000 housing units at the Civil Servant Estate in Isiagu in Awka South LGA to tackle the accommodation challenges of workers while measures were already in place to improve the state internally generated revenue to enable his administration work into the issue of minimum wage in line with his earlier promise to rebuild both physical and human infrastructure.
Mr. Ezeoke thanked the Governor for fulfilling the promise to the workers and urged workers to reciprocate the gesture through hard work and dedication to duty so as to attract more interventions from the government.
Also the State Chairman of Nigeria Labour Congress, Comrade Patrick Obianyo assured that the gesture would indeed encourage punctuality and greater productivity, noting that late comers no longer have excuses to make about lack of transportation.
Send your news stories to [email protected] and via WhatsApp on +233 244244807 Follow News Ghana on Google News

Government pledges to harness potential of children with disabilities