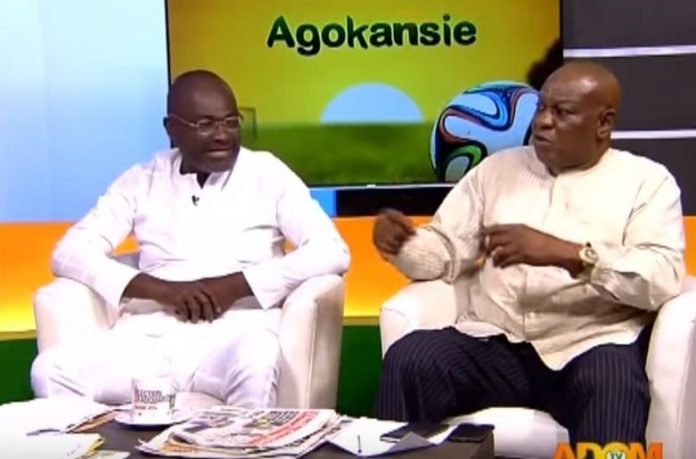 Member of Parliament for Assin Central, Hon Kennedy Ohene Agyapong has for the first time openly revealed his admiration for Alhaji Bature Iddrisu’s courage and frankness in criticizing members of the National Democratic Congress, warning that, he will soon replicate that in his party, the New Patriotic Party.

According to the maverick legislator, the conduct of members of his own governing party after they won power in the 2016 elections requires that he starts exposing wrongs in the NPP like how the Managing Editor of The aL-hAJJ newspaper sometimes take on the biggest opposition party.

Hon Agyapong’s reverence for Alhaji Bature’s style of analyzing national issues was made known on Adom FM’s Badwam program last week after the latter took on founder of the NDC, Mr Jerry John Rawlings over his scathing attack on members of the biggest opposition party at the 38th anniversary of the June 4 revolution.

In a no hold bar response to former President Rawlings, the Managing editor of The aL-hAJJ warned the former Air Force pilot to be measured in his public commentary on the erstwhile administration before he gets himself stripped naked.

“It is disheartening and painful …. I am saddened. This is somebody who has inspired some us for 35 years. I defended Rawlings, his legacy and the NDC even against my father may his soul rest in peace. My father suffered under Rawlings in 1979 and 1982 but I was a PDC Chairman. Rawlings government took me to Mecca in 82 as a welfare officer that is where I got my Alhaji title. But where is treading, he is going to force some of us to expose him. If he does not want anyone to drink from the pot, then let’s break the pot so we can all rest”, he stated.

Accusing the former President of lacking the moral authority to accuse others of corruption, Alhaji Bature counseled Mr Rawlings to deal with corruption in his household, citing the NDC founder’s wife, Mrs Konadu as the most corrupt woman in Ghana.

“I am daring her to take me to court and prove otherwise. Nana Konadu is the most corrupt woman in Ghana and she is currently in court over that. Where are the Ghana National Trading Company (GNTC) properties, where are the cocoa factories and the Nsawam Cannery “, he asked.

“Where are The 31st December Schools? Rawlings and his wife are scared Nana Akufo-Addo will revisit the cases where she (Nana Konadu) allegedly squashed state cash and that is why he is beginning to behave in that manner. I am telling NDC members that Rawlings want to break the party and he is at the verge of breaking it. He sees that he cannot be accepted in the party and his plans to take over the party are not materializing so he is scheming his way through. The fact is that NDC has outlived Rawlings,” he said.

Enthralled by Alhaji Bature’s courage and honesty in openly taking on the founder of a party he supports, Kennedy Agyapong said the best way to deal with his own party members is to mimic The aL-hAJJ’s Managing Editor.

Perhaps, to signal that he would no longer treat members of the NPP with kid gloves, the Assin Central MP threatened to release nude photos of some bigwigs in his party who are pulling all strings to bring him down.

According to him, some faceless characters within the NPP are scheming all day and night to destroy him because they feel he is too loud in his public utterances.

“You can go ahead and plan all sorts of evil against me. But don’t forget I have your naked pictures and if you joke with me I will finish you in Ghana. I am not afraid of anybody. It is a wrong approach they are adopting. I will fight the system until I see change,” he assured.

Winner Takes All: Gyimah-Boadi calls for restructuring of 1992 Constitution