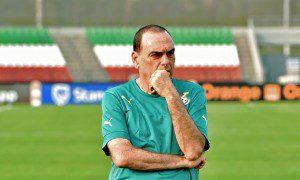 Asante Kotoko deputy coach Michael Osei has called on Black Stars coach Avram Grant to help curb player exodus insisting that his actions could do a lot to check the menace.

According to the former New Edubiase assistant trainer if the Israeli tactician decided to have confidence in the local players and select them to the main Black Stars team it will help in solving mass player exodus that the country is facing currently.

Avram Grant in his recent interview explained that the the Ghana Premier League has quality talent but they do not stay in the country to develop very well before moving outside.

He added that, each Ghanaian player has equal opportunity of being selected into the team and that the local players

But Asante Kotoko number two has insisted that, Avram Grant can help in curbing that mass player exodus.

“He himself has to help. If he says he will not watch then I don’t think he is right because we have to motivate the guys who are playing here by picking some of them into the national team. You don’t have to pick only those outside,” Osei told Accra based Starr FM.