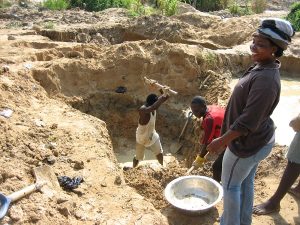 The Chief of Prestea Hemang,Nana Ntaboah Pra IV, has expressed his commitment towards the Government’s campaign against illegal mining in the country. 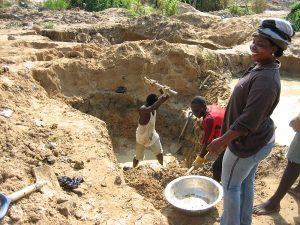 He said illegal mining had ravaged the vegetation and polluted the water bodies in the area.

The Chief expressed his support to the campaign when the two Deputy Ministers of Lands and Natural Resources paid a courtesy call on him at his palace in Prestea Hemang on Monday.

Nana Ntaboah Pra said his traditional area had already taken the initiative by destroying some dredgers being used for illegal mining in River Ankobra.

He said it was embarrassing seeing River Ankobra, which served as a source of drinking water for the inhabitants being turned into a chocolate-like colour.

The Chief noted that the water bodies and the land must be preserved in good condition for the future generation.

He, however, urged the government to educate the affected miners on the various social interventions and alternative livelihoods programmes it would roll out to assuage their fears.

Mrs Barbara Oteng- Gyasi, a Deputy Minister of Lands and Natural Resources, said the Government would provide alternative livelihood programme under the
Multilateral Mining Integrated Project, which about 10 million dollars had been devoted for.

Mr Benito Owusu-Bio, also a Deputy Minister, said illegal miners would be organised into co-operatives and given licence to operate in compliance with the mining law.

Meanwhile, some youth in the town who engaged in galamsey protested in front of the chief’s palace against the move to ban the practice.

They said their livelihoods depended on mining therefore the band would affect their survival.

A community durbar was later organised to take people’s concerns and factor them into the government’s intervention.
GNA/www.newsghana.com.gh