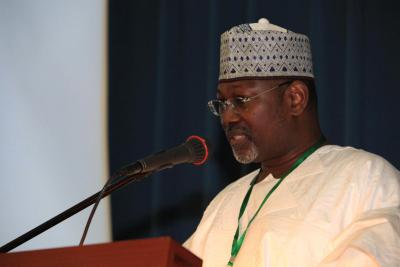 A Coalition of civil society organisations (CSOs) has alleged plans to remove Prof. Attahiru Jega as chairman of the Independent National Electoral Commission (INEC).
The groups also said there were plans to postpone this month?s general elections by using the judiciary
The coalition made up of the Transition Monitoring Group (TMG), Civil Society Legislative Advocacy Centre (CISLAC) and others said it was also aware of plans to declare INEC unfit to manage the elections, thereby leading to its postponement.
An activist, Mrs. Saudatu Mahdi, who spoke on behalf of other members of the coalition in Abuja yesterday, cited the alleged lapse in the distribution of the Permanent Voter Cards (PVCs) as the main reason.
Mrs. Mahdi said: ?In the last few days, there have been different shades of sponsored agitation. We know that the overall objective is to create an atmosphere of uncertainty to justify shift in the polls.
?The enemies of Nigeria?s democracy, we make bold to say, are planning to remove the INEC chairman to pave the way for the appointment of a plaint, submissive and dependent stooge, who will be more willing to do the bidding of the powers that be.
?A corollary to this is what we already see playing out in some states, where some INEC?s resident electoral commissioners are going into overdrive in a bid to please the powers that be.?
She said the coalition was aware of the existence of some fifth columnists, who were? eager to blunt the goodwill of the INEC chairman by recruiting crowds to protest against him.
Also speaking, the TMG Chairman, Ibrahim Zikirullahi, while condemning plans to use the judiciary to scuttle the polls, urged well-meaning citizens as well as the intelligentsia to brace themselves? to defend democracy.