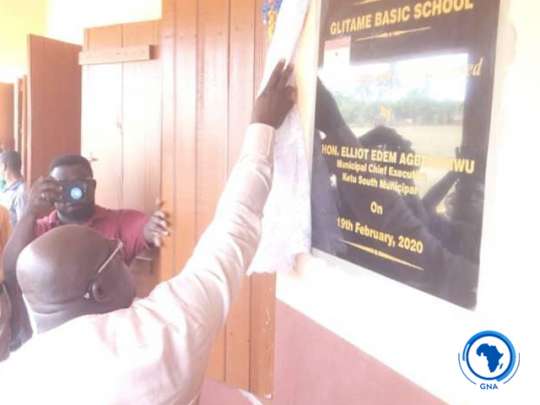 Mr Elliot Edem Agbenorwu, Municipal Chief Executive (MCE) for Ketu South has appealed to indigenes of the area to vote massively for the New Patriotic Party (NPP) in the upcoming general election for unprecedented development in the area.

He said the current government had undertaken a lot of programmes and policies including; the Free Senior High School, Nation Builders Corps (NaBCo), restoration of allowances for trainee teachers and nurses and, local government scholarship to directly impact lives, adding, “everyone in the municipality is a living testimony to development projects going on in the Assembly.”

He said this on during the commissioning of a 3-unit classroom block with ancillary facilities for pupils and staff of Glitame Basic School to address challenges impeding effective teaching and learning there.

Mr Agbenorwu who started his speech quoting Philippians 4:13 from the Bible, “I can do all things through Christ who strengthens me” called on citizens of Glitame and Ketu South to retain the NPP government in power to continue to have an NPP MCE and also vote for Mr David Tiahno, the NPP Parliamentary candidate in the December polls for more development projects.

He said the National Democratic Congress (NDC), which over the years enjoyed tremendous support of the Municipality, did little in appreciation of the people’s loyalty saying, there were “ministers, deputy ministers, members of Parliament and MCEs from this Municipality in NDC government yet problems abounded.”

Mr Marvelous Degbor, the Head teacher, Glitame Basic School thanked the MCE and the government for the timely intervention saying, the lack of classrooms compelled classes to be combined, while teaching and learning went on under sheds and in the open.

“Teaching and learning in the school has been difficult.

Though we made several calls for help, nothing changed, but when this new government came, we approached the Assembly and we got 40 desks earlier and now, this new block. These will help the school to improve on its academic fortunes.”