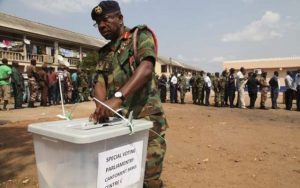 The Electoral Commission (EC) of Ghana has opened another opportunity for persons who were unable to vote during the special voting held on Thursday to do so with the hope this will address the numerous challenges that were encountered. Sunday December 4, 2016, has  therefore been set aside for some of the over 127,394 voters whose names went missing on the registers at the designated polling stations when they turned up to vote to be part of the exercise .

There was confusion at most polling stations as security personnel, the media, political party agents and EC officials  were left frustrated after it was disclosed that persons who could not vote may not be able to exercise their franchise again.

Following this, an emergency Inter Party Advisory Committee (IPAC) meeting was held late Thursday evening and after deliberations, it was unanimously agreed the period of special voting be extended.

The voting will be conducted across the country on the stated date according Deputy Communications Director of the EC Yusif Ayuba on Abusua Nkomo.