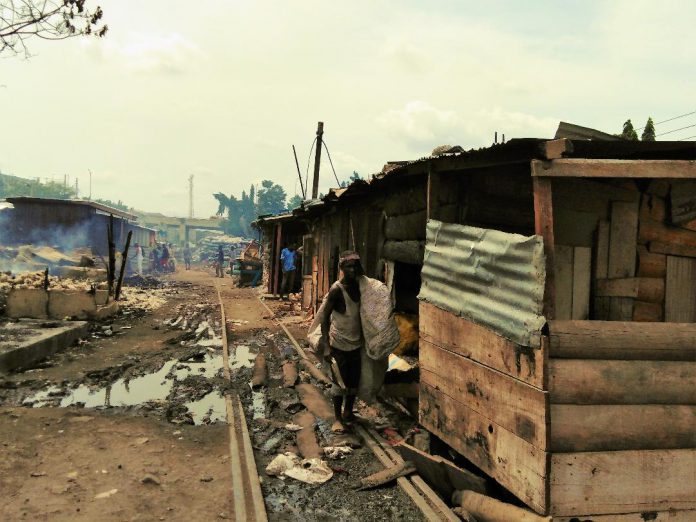 Some squatters at the sprawling slum dotted along the Asafo Railway Line in the Central Business District (CBD) of Kumasi, who were displaced by the recent fire outbreak at the area, have commenced erecting wooden structures to be used as places of abode.

The majority of wooden structures in the area got burnt about a month ago, following the fire outbreak which resulted in the death of one Nana Yaw, an unemployed man.

The inferno swept through about 30 wooden structures at the slum, leaving property destroyed.

When the Ghana News Agency (GNA) visited the vicinity on Monday, May 31, some of the affected squatters were busily reconstructing the damaged wooden structures.

A substantial number of the structures had been rebuilt at the blind side of the city authorities, and the occupants are back to their former abodes, despite the security threats the slum posed to the people.

The Ashanti Regional Command of the Ghana National Fire Service (GNFS), in an interview with the GNA, Kumasi, in the wake of the incident, had warned of dire consequences if authorities did not expedite action to demolish the sprawling slum.

“We are sitting on a time bomb because the varied human activities being undertaken in the area could trigger fire outbreaks at any point in time,” Divisional Officer (DO) III, Desmond Ackah, the Regional Public Relations Officer, GNFS, cautioned.

He expressed concern at the way the area had become notorious for criminal activities while serving as a den for drug peddlers, whose course of activities had made the area also susceptible to fire.

According to the firefighter, the many illegally-sited structures served as the impediment in their bid to reach the affected zones and called for drastic measures to clear the area of criminals.

Mr. Sampson Ayore, one of the affected squatters, in an interview, said he had been living at the slum since 1996, stressing that he had no place to go if he was evicted.

The latest development had become a source of worry to residents of Asafo and other nearby suburbs, who had over the years been complaining of the way the area had virtually become a no-go area, especially after 1800 hours.

Currently, a substantial number of illegal immigrants have found a haven at the slum as they occupy some of the wooden structures.