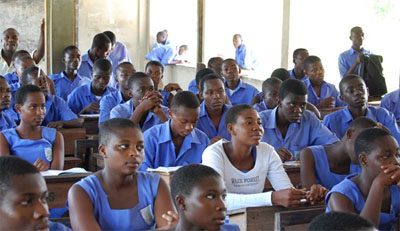 The headmistress of Ghana National College, the Mrs. Juliana Owusu Ansah, has condemned the practice where some parents invite their wards to leave school to attend every family gathering at home.

She noted that besides disrupting their studies, some students could also indulge in undesirable activities during their trip back to school.

The headmistress, who expressed these sentiments, at the School?s 67th Speech and Prize Giving Day in Cape Coast, also expressed concern about the use of mobile phones by students during and after classes at the expense of their studies.

The Day was on the theme: ?Educating the Youth for Academic and National Development ? Our Role?.
?While I understand the need to stay in touch with family, the uncontrolled use of mobile phones has become a menace that together we must confront,? she declared.

On accommodation, she said, the school needed more dormitories to be built because it had to convert its assembly hall into a girls? dormitory to create additional facilities to accommodate them at the beginning of the academic year.

?The imbalance is having a negative effect on the boys? besides, Osagyefo wanted a co-ed school not another girl?s school?, she said. ?We should not allow ourselves to be carried away by our zeal to place more girls to forget this.? Mrs. Owusu Ansah stated.

Mrs. Owusu-Ansah, who is the first female head of the school, also appealed to the Government for the construction of a second dining hall because to stop the practice where the students eat in turns.

They also need new classroom blocks, an assembly hall, and the renovation of the masters? bungalows and boys? dormitories.
She said the current nationwide power crisis had adversely affected academic work and the administration of the school and, therefore, appealed to the Government, old students and all stakeholders to assist the school to buy generators for the strategic sections of the school.

According to her, the school?s performance level during last year?s West African Senior School Certificate Examination declined but she pledged to work harder to excel in this year?s exams.

On discipline, Mrs. Owusu-Ansah said some students had been withdrawn from the school for indiscipline for various offences and urged students to be law abiding since the school would not entertain indiscipline.

She expressed gratitude to the Government, stakeholders, former students, especially the 1989 year group, which supported the awards, and that of 1983, which had donated 40 drying lines to the boy?s dormitories, and called for continual support and commitment.

Mr. Charles Aheto-Tsegah, Director of the National Council for Curriculum Assessment (NCCA) of GES, reminded teachers to put aside the cane and adopt effective means to instill discipline in students because the cane had the tendency to intimidate the students.

He underscored the critical role Government, parents, teachers and students themselves played in educating the youth for national development and urged all parties to play their roles effectively to revive the dream of the Osagyefo Dr. Kwame Nkrumah to make Ghana the beacon of quality education

The Central Regional Minister, Mr. Aquinas Tawiah Quansah, noted that youth development did not occur in a vacuum and urged communities not to perceive education as the sole responsibility of the government but a shared responsibility.

He urged students to take advantage of the resources available to them to excel and avoid negative tendencies such as drugs and indiscipline which could mar their otherwise bright future.

He pledged to ensure the construction of a new assembly, dining halls, and classroom blocks for the school by the end of the year.
GNA
AT
March 3, 2015