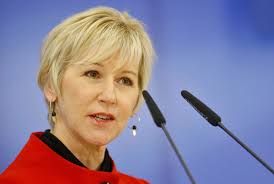 The United Arab Emirates on Wednesday recalled its ambassador to Sweden over “abusive remarks” against neighbouring Saudi Arabia.

Wallstrom’s remarks were cited by the UAE in its decision to recall Ambassador Sultan Rashed AlKaitoob.

“These statements violate the principle of sovereignty upon which the normal relations between countries are based,” said UAE minister of state for foreign affairs, Anwar bin Mohammed Gargash.

Such remarks are “deemed interference in internal affairs as they do not respect the religious and cultural particularities of states and communities,” the UAE Foreign Ministry statement read.

A protest letter was also handed to the Swedish ambassador to the UAE, Jan Thesleff.

“We have good and broad relations with the United Arab Emirates that we want to protect and develop,” he said, noting that the UAE and Saudi Arabia have “very close ties.”

Wallstrom had earlier criticized the treatment of jailed Saudi blogger Raif Badawi, sentenced to 1,000 lashes and 10 years in jail for allegedly insulting Islam.

Last week, Wallstrom said she had been blocked by Saudi Arabia from giving a speech at a meeting of the Arab League in Cairo.

Wallstrom had been invited as a guest of honour to Cairo after the new Swedish government’s decision in October to recognize the state of Palestine.

Russia in Favor of Algeria’s Accession to BRICS – Ambassador