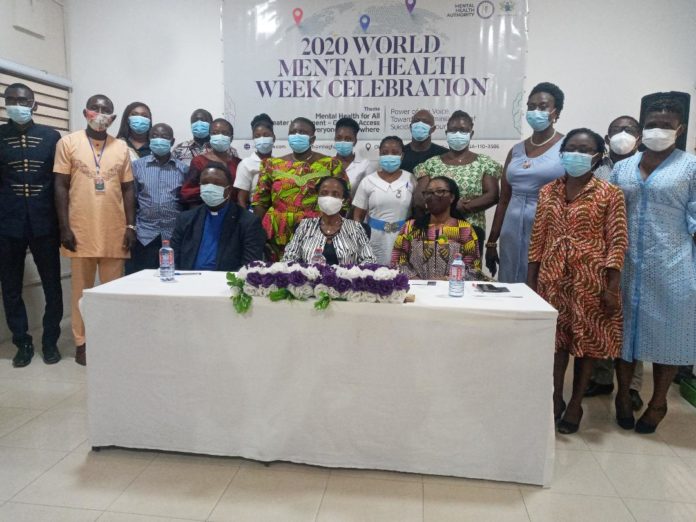 The Mental Health Authority (MHA), has launched the 2020 World Mental Health Week celebrations, with the call on stakeholders to give mental health the needed attention by making the services available to people who need care.

The weeklong celebration in Ghana is on the theme “The power of the voice towards decriminalization of suicide,” while the global theme celebration is “Mental health for all: greater investment, greater access.”

Dr Caroline Amissah, Deputy Chief Executive Officer, MHA said the theme for the celebration in Ghana was chosen because the authority had started some works on suicide since data available indicate that everyone was likely to suffer suicide at any point in life. Thus in every 40 seconds, somebody attempts suicide.

She said the world mental health day is just celebrated in a day, but the authority decided to extend this to cover one week, to be able to heighten and increase awareness on mental health nationwide.

She said this was also to ensure that mental health issues, education, awareness creation, activities were carried out with the involvement of other stakeholders and collaborators, just to put mental health, where it belonged, and ensure that everybody appreciates the need to increase attention on it.

She noted that the authority had also begun deliberations with the Attorney General’s Department to see how best to decriminalize suicide in Ghana. “If somebody attempts suicide, for us the person needs support, but for the country, it is a criminal offence and that person would either end up behind bars or not get the support he or she needed.”

“As mental health professionals, we accept and we know that people who do that have some form of mental illness, and that is a condition that needs attention, to see how best it could be solved.”

She called on both government and non-government institutions to ensure that mental health services were accessible to everyone, thus people must be allowed to seek care when they need it.

Mrs Estelle Appiah, Board Chairperson, MHA said one in every five people in Ghana have a mental health problem, and such issues of mental health should be everybody’s business, adding at seven percent Of Ghana’s GDP was lost t mental health issues.

She said the theme for Ghana’s celebration was chosen because suicidal behavior has become a public health problem, saying suicide cases were now on the increase, as about 1,500 suicides were committed annually.

Mrs Appiah said Act 29 was based on the British Common Law which has long been repealed since 1961 in the United Kingdom, so that suicide attempt was no longer seen as a criminal offence but treated as a health problem requiring professional psychological and or psychiatric attention.

“The criminalization of attempted suicide encourages persons who have suicidal tendencies to take every measure to ensure that, they do not only fail in their attempt and also discourage suicidal persons from reporting suicidal crises early enough for help.”

Mrs Appiah noted that instead of prosecuting these persons, every person identified to have considered or attempted any form of suicide must immediately seek help from a psychiatrist or clinical psychologist.

She said “Education on how to understand suicidal behaviour and suicidal people may aid the work towards decriminalizing attempted suicide in Ghana. We need a collective voice to speak on mental health issues.”

Rev. Dr Cyril Gershorn K. Fayose, President Christian Council of Ghana said, the celebration, was a call for all to strengthen advocacy, collaboration, and partnership in a way that would ensure that investment in mental health was prioritize mental health.

He said there was a need to find ways for the church as a social entity to collaborate with the health authorities to get mental health patients off the streets.

Some activities lined up for the week-long celebration, include a Webinar on depression, on October 9, media engagement, on various media platforms on October 10, stakeholders meeting with the Ministry of Health, and the AG’s Department on October 12.

Others are a Webinar on decriminalizing suicide on October 13, and a sensitization on the mental health Act in Accra, on October 14 and 15, and in Kumasi on October 21 and 22.